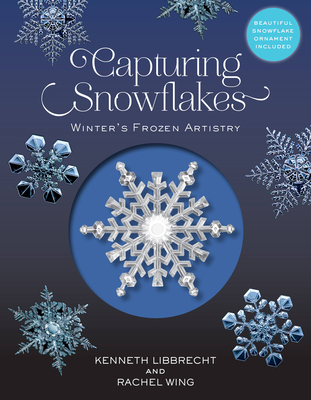 
Not On Our Shelves—Ships in 1-5 Days
As much a work of art as a testament to science, this revised, hardcover edition of the best-selling The Art of the Snowflake (now Capturing Snowflakes) includes a laser-cut silver snowflake ornament in its cover and showcases 430+ images of snowflakes captured by the photo-microscope of the world’s leading expert on the subject, Kenneth Libbrecht, a professor of physics at Caltech who also served as a science consultant for Disney’s Frozen movies.

The snow may seem unvaried to the naked eye, but the microscope reveals an amazing menagerie of beautiful crystalline forms. Building on the pioneering work of Wilson Bentley (1865-1931), Libbrecht has developed techniques for capturing images of snow crystals in unprecedented detail. While wondering at the hundreds of exquisite snowflake portraits, find: This book is a breathtaking look at the works of art that melt in an instant.

Kenneth Libbrecht is a professor of physics at Caltech, where he studies the molecular dynamics of crystal growth, especially how ice crystals grow from water vapor, which is essentially the physics of snowflakes. He has authored several books on this topic, including The Snowflake: Winter's Secret Beauty, The Art of the Snowflake, and Ken Libbrecht's Field Guide to Snowflakes. He lives in Pasadena with his wife, Rachel Wing. They have two children.

Rachel Wing is a park ranger for the city of Monrovia, California, at the foot of the San Gabriel Mountains. With a background in geology, she now specializes in balancing wilderness preservation with wildfire safety for nearby residents. Rachel loves to hike and climb in these hills, especially on the rare occasions when snow graces our desert-like plants. She has been accompanying Ken Libbrecht as a snowflake chaser for nearly 20 years.