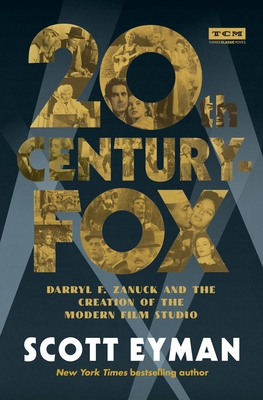 
In Stock—Click for Locations
From New York Times bestselling author Scott Eyman, this is the story one of the most influential studios in film history, from its glory days under the leadership of legendary movie mogul Darryl F. Zanuck up to its 2019 buyout by Disney.
March 20, 2019 marked the end of an era -- Disney took ownership of the movie empire that was Fox. For almost a century before that historic date, Twentieth Century-Fox was one of the preeminent producers of films, stars, and filmmakers. Its unique identity in the industry and place in movie history is unparalleled -- and one of the greatest stories to come out of Hollywood. One man, a legendary producer named Darryl F. Zanuck, is the heart of the story. This narrative tells the complete tale of Zanuck and the films, stars, intrigue, and innovations of the iconic studio that was.
Scott Eyman is an award-winning author of 15 books about the movies, three of which have been New York Times bestsellers. He's a frequent book reviewer for The Wall Street Journal, Film Comment, and the New York Observer. His books include Hank & Jim: The Fifty-Year Friendship of Henry Fonda and James Stewart; John Wayne: Louis B. Mayer: Lion of Hollywood; and Print the Legend: The Life and Times of John Ford. He lives in West Palm Beach, Florida.
“There have been many studies of the great American film studios, so any new entry in the field has to supply something new — and that is precisely what Scott Eyman provides in his fascinating and well-researched volume on 20th Century Fox”
—Barry Forshaw, Crime Time

“Film historian and bestselling author Scott Eyman has done it again with 20th Century-Fox.”
—Danielle Solzman, Solzy At The Movies

"This is a lot to cover in 300 pages...but Mr. Eyman is aided immensely by his gift for pithy observation and his ability to draw a portrait with a few deft strokes."
—Wall Street Journal

"There is not, in my estimation, a better way to describe the essence of Darryl F. Zanuck than Eyman accomplishes here, as he widens the lens on Zanuck's drives, vision, and personal philosophy of life, all of which lives on in the dreams of the cinema created under his dedicated and fantastical mind."—EDGE Media Network