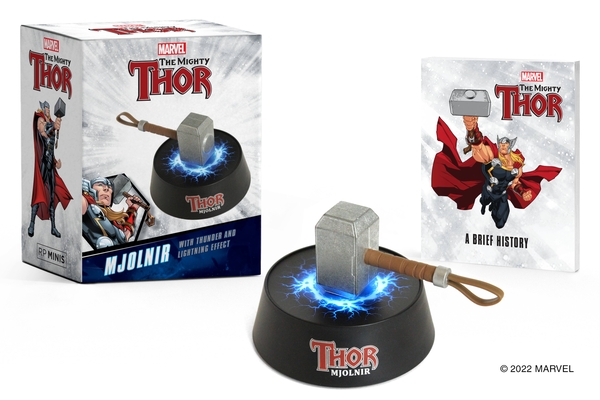 
Not On Our Shelves—Ships in 1-5 Days
Wield the power of Thor with this officially licensed mini replica of the legendary Mjolnir!“Whosoever holds this hammer, if they be worthy, shall possess the power of Thor!”

© 2022 MARVEL
Marvel Entertainment, LLC, a wholly-owned subsidiary of The Walt Disney Company, is one of the world's most prominent character-based entertainment companies, built on a proven library of more than 8,000 characters featured in a variety of media for over eighty years. Marvel utilizes its character franchises in entertainment, licensing, publishing, games, and digital media. For more information visit marvel.com.

Robert K. Elder is the author of fourteen books and a longtime pop-culture writer. He has written about comic books for the New York Times, Chicago Tribune, and the Comics Journal, among other outlets. His books include Hemingway in Comics and The Mixtape of My Life. He carries a surprisingly heavy miniature version of Thor's hammer, Mjölnir, on his keychain.