Engines: The Inner Workings of Machines That Move the World (Hardcover) 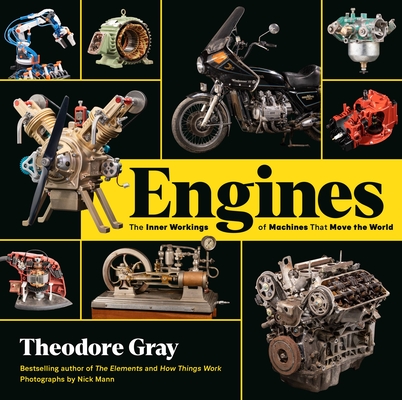 Engines: The Inner Workings of Machines That Move the World (Hardcover)


On Our Shelves Now at:
The international bestselling author of How Things Work and The Elements Trilogy turns his focus to a visual exploration of the inner workings and functionality of the marvelous machines that run our world—from the first steam engines to giant turbines to today's tiny electrical engines.

In Engines, the always entertaining and informative Theodore Gray explores the glorious guts and intricate innards of dozens of impressive machines. Through his engaging and unexpected stories and Nick Mann’s trademark gorgeous photography, Gray takes us on a journey from ancient Greek steam engines to our most sophisticated twenty-first-century machinery. We take time to appreciate the detailed functionality of the internal combustion engine, the connection between magnetism and electric motors, as well as hydraulics, robotics, and more. Each chapter builds on the previous, illuminating the evolution of engines and revealing the ingenuity brought to bear as humans invented and perfected these marvelous mechanical systems. Along the way, Gray regales us with tales of his own experiences working with and collecting these machines. For fans of how things are made and how they work, Engines is a loving tribute to the mechanical world.
Theodore Gray is the author of How Things Work, The Elements, Molecules, and Reactions, as well as Theodore Gray’s Completely Mad Science. He is the creator of the bestselling iPad apps “Elements” and “Molecules,” which have both been named App of the Week by Apple, and he was the director of “Disney Animated” (also honored by Apple as iPad App of the Year). Gray appeared onstage with Steve Jobs several times in his capacity as a software creator. He also co-founded Wolfram Research, Inc., makers of the widely used software Mathematica and the Wolfram Alpha website. He lives in Urbana, Illinois.

Nick Mann is a photographer specializing in taking beautiful photos of inanimate objects on black backgrounds. His other work includes The Elements, Molecules, Reactions, and How Things Work. In his other life he designs and makes specialized note- taking fieldwork equipment, as well as working in the quality control department for a large automotive company. He lives with his wife and stepson in Urbana, Illinois.
"Another masterpiece."—BoingBoing, on How Things Work

“A stunning coffee-table book with detailed photos. Theodore Gray explores how everyday things work in great detail, going so far as to build some of them himself . . . What Gray did in his previous books about elements, molecules, and reactions, he has now done for the mechanical systems that run our world, and the result is a beautiful appreciation for systems we all often overlook.”

—Ars Technica, on How Things Work