Cowboys, Mountain Men, and Grizzly Bears: Fifty of the Grittiest Moments in the History of the Wild West (Paperback) 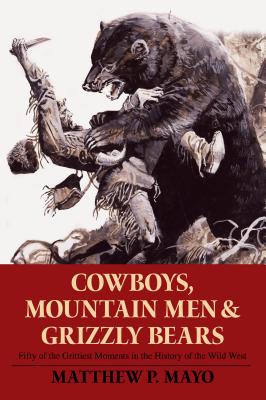 Cowboys, Mountain Men, and Grizzly Bears: Fifty of the Grittiest Moments in the History of the Wild West (Paperback)


Not On Our Shelves—Ships in 1-5 Days
From the first bloody battles between mountain men and Indians to shootouts between famous gunslingers, Cowboys, Mountain Men, and Grizzly Bears cuts to the chase of what draws people to the history and literature of the Wild West. Matthew Mayo, noted author of Western novels, takes the fifty wildest episodes in the region's history--including John Colter's harrowing escape from the Blackfeet, Hugh Glass's six-week crawl to civilization after a grizzly attack, Custer's final moments, and John Wesley Powell's treacherous run through the rapids of the Grand Canyon--and presents them in one unputdownable, action-packed volume.
Matthew P. Mayo's previous books include the Western novels Winters' War, Wrong Town, and Hot Lead, Cold Heart. In addition to writing novels and non-fiction, Mayo has had short stories and poetry published in a variety of anthologies, and he edited the anthology Where Legends Ride: New Tales of the Old West. He is also a magazine editor and a member of Western Writers of America and Western History Association.