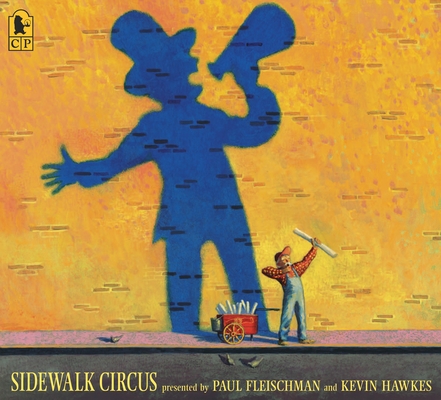 
Backordered
This delightful book will fascinate children and help them to see their world with new eyes. — School Library Journal (starred review)

Ladies and gentlemen, boys and girls! Step right up and witness an astounding assemblage of tightrope walkers, strong men, sword swallowers, and clowns. The Garibaldi Circus is coming soon, but for those with clear eyes, the performers may already be in the ring. So get ready to sharpen your vision and look very closely — a show like you’ve never seen is about to begin! The creators of Weslandia are back in the spotlight with a spectacular, wordless picture book that shows the transformative power of imagination.
Paul Fleischman is the award-winning author of many books for children and young adults, including JOYFUL NOISE: POEMS FOR TWO VOICES, winner of the Newbery Medal; WESLANDIA, a SCHOOL LIBRARY JOURNAL Best Book of the Year and an American Library Association Notable Children’s Book; and THE ANIMAL HEDGE, illustrated by Bagram Ibatoulline. "It came out of the blue," Paul Fleischman says of SIDEWALK CIRCUS. "A vision of a ringmaster standing on a city street, describing the sun rising and the clouds changing color as if they were circus acts. Eventually, I decided to leave him out of the story. And then I decided to leave the words out as well."

Kevin Hawkes is the illustrator of a number of popular books for children, including WESLANDIA and HANDEL, WHO KNEW WHAT HE LIKED, an American Library Association Notable Children’s Book and recipient of a BOSTON GLOBE-HORN BOOK Honor Award. He says, "As I worked on SIDEWALK CIRCUS, I spent a lot of time in Portland, Maine. I was amazed by all the things going on in the city, and all the people and things I had never really noticed before. I am grateful to Paul Fleischman for opening my eyes."