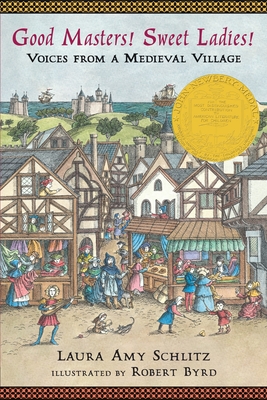 
Not On Our Shelves—Ships in 1-5 Days
Newbery Medal Winner! Step back to an English village in 1255, where life plays out in dramatic vignettes illuminating twenty-two unforgettable characters.

Maidens, monks, and millers’ sons — in these pages, readers will meet them all. There’s Hugo, the lord’s nephew, forced to prove his manhood by hunting a wild boar; sharp-tongued Nelly, who supports her family by selling live eels; and the peasant’s daughter, Mogg, who gets a clever lesson in how to save a cow from a greedy landlord. There’s also mud-slinging Barbary (and her noble victim); Jack, the compassionate half-wit; Alice, the singing shepherdess; and many more. With a deep appreciation for the period and a grand affection for both characters and audience, Laura Amy Schlitz creates twenty-two riveting portraits and linguistic gems equally suited to silent reading or performance. Illustrated with pen-and-ink drawings by Robert Byrd — inspired by the Munich-Nuremberg manuscript, an illuminated poem from thirteenth-century Germany — this witty, historically accurate, and utterly human collection forms an exquisite bridge to the people and places of medieval England.
Laura Amy Schlitz is the author of the Newbery Medal–winning Good Masters! Sweet Ladies! Voices from a Medieval Village, the Newbery Honor Book and New York Times bestseller Splendors and Glooms, and several other books for young readers. A teacher as well as a writer, Laura Amy Schlitz lives in Maryland.

Robert Byrd teaches children’s book illustration at the University of the Arts in Philadelphia. He is the author-illustrator of many books, including Leonardo: Beautiful Dreamer; Finn Maccoul and His Fearless Wife; and The Hero and the Minotaur. He also illustrated Laura Amy Schlitz’s first book for children, The Hero Schliemann, about the life of a nineteenth-century amateur archaeologist. Robert Byrd lives in Haddonfield, New Jersey.
Schlitz is a talented storyteller. Her language is forceful, and learning slips in on the sly.
—The New York Times

A vivid, convincing portrait of medieval adolescence.
—Bulletin of the Center for Children’s Books (starred review)

A rewarding choice for performance or for reading aloud in the classroom.
—Booklist (starred review)