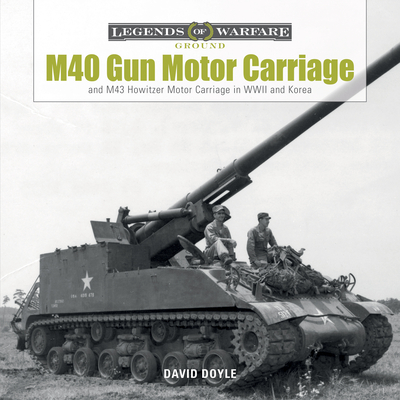 This is book number 2 in the Legends of Warfare: Ground series.

The M40 Gun Motor Carriage and M43 Howitzer Motor Carriage are featured in over 200 photographs, providing a detailed study of the conception, development, testing, and combat use of these key vehicles. As the US entered WWII, the nation lacked heavy self-propelled artillery, instead relying heavily on towed artillery, much of it WWI-surplus. Only 100 examples of the nation's first heavy self-propelled gun, the M12, were built. Finding favor once deployed, attention was turned to developing an improved model. Initially designated the T83, and later as the M40, the new 155mm Gun Motor Carriage was first fielded in the closing months of WWII. Already scheduled for mass production, the M40, and its companion 8-inch howitzer-armed M43, continued to see extensive use during the Korean War, providing crucial support to infantry and armor formations. Historic period images, as well as meticulously photographed surviving examples, provide a detailed look at this important piece of US military hardware.
Author of over 100 books, David Doyle was presented the Bart Vanderveen Award, recognizing, ..". the individual who has contributed the most to the historic preservation of military vehicles worldwide" in 2015 by the Military Vehicle Preservation Association.