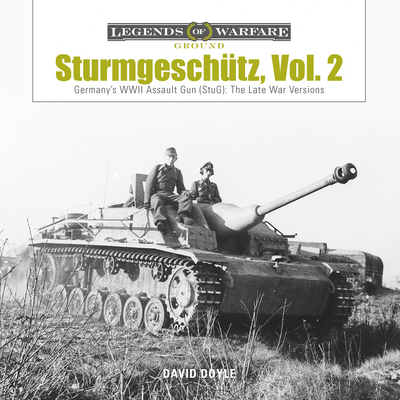 This is book number 5 in the Legends of Warfare: Ground series.

The Sturmgesch tz, or StuG, as it is more popularly known, while conceived as self-propelled, infantry support artillery, in time, formed the backbone of Germany's anti-tank operations during WWII. With more than 135 war-era photos, this volume chronicles the design, development, and deployment of the first six (of nine variants) of this famed and feared weapon. The material is arranged in seven chapters, each focusing on a specific production model, or Ausf hrung, of the Sturmgesch tz. This volume covers the Ausf.A through F/8 variants used during the early WWII years. Comprehensive tables reveal the details of performance, as well as technical specifications of each variant. A concise, easy-to-read text, and detailed photo captions expose the secrets of this iconic vehicle. Part of the Legends of Warfare series.
Author of more than 100 books, David Doyle was presented the Bart Vanderveen Award, recognizing, ..". the individual who has contributed the most to the historic preservation of military vehicles worldwide" in 2015 by the Military Vehicle Preservation Association.