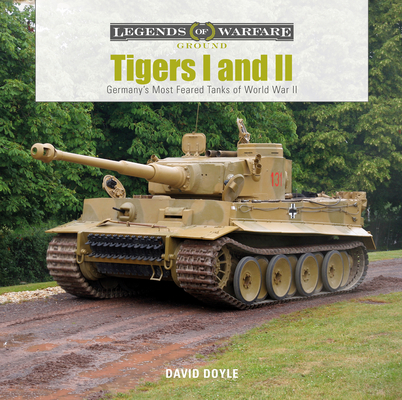 This is book number 14 in the Legends of Warfare: Ground series.

Germany's Tiger tank, whether in the form of the Tiger I or later Tiger II (King Tiger), was the most feared tank of WWII. Despite production totaling fewer than 2,000 units, its heavy armor, its power, and perhaps the even more powerful Nazi propaganda machine ensured that the Tiger remains well known over seven decades after last being on the battlefield. Through more than 175 photos, this volume chronicles the design, development, and deployment of this famed German tank. Full-color photographs of rare surviving examples from around the globe augment carefully selected war-era photos in bringing this tank back to life. Comprehensive tables reveal the details of performance and technical specifications of each variant. A concise, easy-to-read text and detailed photographic captions expose the secrets of this iconic tank. Part of the Legends of Warfare series.
Author of more than 100 books, David Doyle in 2015 was presented the Bart Vanderveen Award, recognizing "the individual who has contributed the most to the historic preservation of military vehicles worldwide" by the international Military Vehicle Preservation Association.