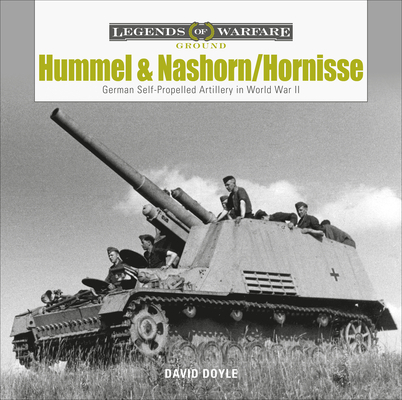 This is book number 16 in the Legends of Warfare: Ground series.

The Hummel (bumblebee) and Nashorn (rhinoceros) are two of Nazi Germany's most widely recognized self-propelled artillery pieces. The Hummel, with its heavy field howitzer, was indispensable as heavy field artillery despite its open-top fighting compartment. The Nashorn, also known as the Hornisse (hornet), utilized the same chassis but mounted the formidable 88 mm antitank gun, becoming one of the most feared pieces of antitank artillery, or Panzerj ger (tank hunter). This book chronicles the development and use of these vehicles from concept to combat. Through dozens of archival photos, many never before published, as well as detailed photographs of some of the finest existent examples of surviving vehicles, these iconic armored fighting vehicles are explored, and their history is explained.
The aircraft books of David Doyle, author of over 125 books, are noted for their thorough coverage of historic warplanes and his celebrated ability to locate rare vintage imagery.