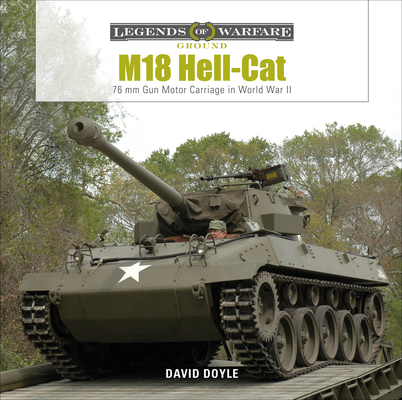 This is book number 18 in the Legends of Warfare: Ground series.

The M18 was developed in an era when the United States fought tanks not with other tanks, but with specialized tank destroyers. With a powerful aircraft-style radial engine pushing it at up to 50 miles per hour, and mounting a potent 76 mm cannon, the Buick-built M18 Hellcat, or "Hell-Cat" as Buick's publicists named it, provided US troops with a powerful shoot-and-scoot answer to heavily armored German tanks. Further experiments were conducted to increase its armament or adapt it to other uses, such as the M39 armored utility vehicle. Through dozens of archival images, many never before published, as well as detailed photographs of some of the finest existent examples of these vehicles, this iconic tank hunter is explored, and its history is explained. Part of the Legends of Warfare series.
Author of more than 100 books, David Doyle in 2015 was presented the Bart Vanderveen Award, recognizing "the individual who has contributed the most to the historic preservation of military vehicles worldwide" by the international Military Vehicle Preservation Association.