The 29th Waffen-SS Grenadier Division Italienische Nr.1: And Italians in Other Units of the Waffen-SS: An Illustrated History (Hardcover) 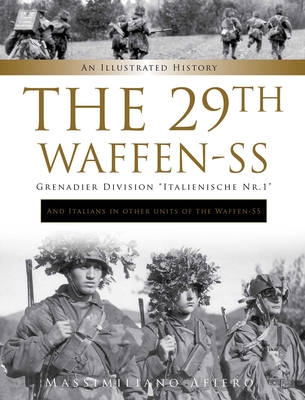 The 29th Waffen-SS Grenadier Division Italienische Nr.1: And Italians in Other Units of the Waffen-SS: An Illustrated History (Hardcover)


Not On Our Shelves—Ships in 1-5 Days
The Italian government signed an armistice with the Allies on September 8, 1943, but that did not mean the war was over in Italy. Italians continued to fight on both sides for the duration of the war. This study is focused on Italian volunteers in formations of the Waffen-SS. These include the SS Legion Italiana and 29th Waffen Grenadier Division Italienische Nr.1. Beyond the explicitly Italian units, handfuls of men found their way into other divisions, such as the 4th SS Panzergrenadier Division Polizei, 16th SS Panzergrenadier Division Reichsf hrer-SS, the Karstwehr Battallion (later 24th SS Gebirgsj ger Division Karstj ger), and even the famous 1st SS Panzer Division Leibstandarte. This work includes histories of the Italian Legion and the 29th Division, extensive interviews with Italian SS veterans from various units, and many excellent photographs from private collections in Europe.