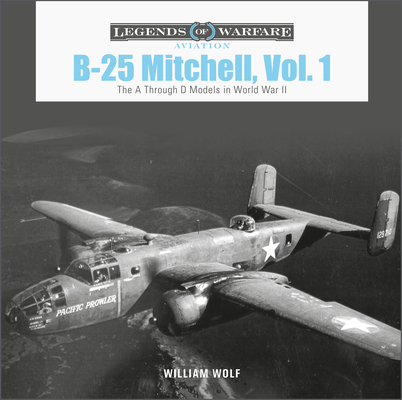 This is book number 54 in the Legends of Warfare: Aviation series.

The North American B-25 Mitchell is WWII's most heralded and versatile medium bomber. Volume 1 (of two) gives the reader a concise illustrated look at the A through D models and follows the bomber's genesis from the formation of the North American Company and its early steps toward the development of the NA-40, the first B-25. The continued evolution of the Mitchell from the A, B, C, and finally to the iconic D models is described in vintage photos. The production at the parent Inglewood, California, plant and then the Kansas City plant is illustrated, as are the important modification centers. The last half of the book covers the D model in many color photos of the interior and exterior, from nose to tail and from wingtip to wingtip. The Wright R-2600 radial engine and Hamilton-Standard propeller are detailed, as are their associated systems. The Mitchell's markings and insignia changes are featured throughout.