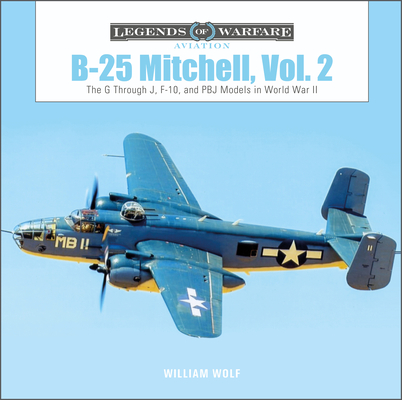 This is book number 56 in the Legends of Warfare: Aviation series.

This second of two volumes on the North American B-25 Mitchell covers the late-WWII G through J, F-10, and PBJ variants of the famed US medium bomber. Among the many topics discussed are the Mitchell versions used by the US Navy and Marine Corps, as well as photo-recon and experimental types. B-25s in foreign wartime service are also shown, including those used in Poland, France, England, and Soviet Russia. A detailed chapter covers all types of armament used in the Mitchell, from guns and cannon of various calibers to ammunition used, including machine gun rounds, rockets, and bombs. A special section of the book features discussions on unique B-25 missions, events, and aircrew during WWII and in the postwar era, such as the April 1942 Doolittle Raid and the B-25 collision with the Empire State Building in July 1945. B-25 appearances in classic feature films such as Thirty Seconds over Tokyo and Catch-22 are also detailed.