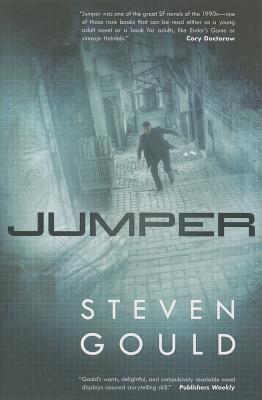 This is book number 1 in the Jumper series.


Davy can teleport. He first discovers his talent during a savage beating delivered by his abusive father, when Davy jumps instantaneously to the safest place he knows, his small-town public library. As his mother did so many years before, Davy vows never to go home again. Instead, he sets off, young and inexperienced, for New York City.

Davy gradually learns to use and control his powers, first for sheer survival in an environment more violent and complex than he ever imagined. But mere survival is not enough for Davy. He wants to know if his mother disappeared so completely from his life because she, too, could Jump. And as he searches for a trace of anyone else with powers like his own, he learns to use his abilities for more than escape and theft.

A young man with nothing to lose, and the ability to go anyplace he wants, can help a lot of people. But he can also make a lot of trouble, and sooner or later trouble is going to come looking for him. The one way Davy can think of to locate others who can Jump is to make himself visible to them, but if he does, the police will surely find him too.

STEVEN GOULD is the author of the beloved classic Jumper, basis for the 2008 film of the same name, as well as Wildside, Helm, Blind Waves, Reflex, and Jumper: Griffin’s Story. He is the recipient of the Hal Clement Young Adult Award for Science Fiction and has been nominated for both the Hugo and the Nebula awards. Gould lives in New Mexico with his wife, writer Laura J. Mixon.

“Jumper was one of the great sf novels of the 1990s--one of those rare books that can be read either as a young adult novel or a book for adults, like Ender's Game or vintage Heinlein. […] Now there's a sequel to Jumper, called Reflex, and last night I ended up burning about two hours' worth of jealously hoarded sleep-time to finish this thing. […] This kind of book doesn't come along all that often, and when it does, it's cause for celebration--run, don't walk.” —Cory Doctorow

“Gould proves once again that in the hands of a wonderful, perceptive writer, there is no such thing as an old idea. What sets Jumper apart from other novels that dip back into the well of the masters is that Gould brings his own keen empathy and rigorous intelligence to the story, exploring what the ability to ‘jump' means in the life of this particular young man…. This is a book that you won't want to miss. It reminded me of why I first came to love science fiction, and yet I didn't have to be twelve again to have a great time reading it.” —Orson Scott Card

“Jumper is very good indeed... in its concept and execution it harks back to a time in SF which could probably teach any of the new writers a thing or two about simplicity--of concept and execution.... All in all a very satisfying novel that answers for you the age old question, ‘What if I could...?'” —Isaac Asimov's Science Fiction Magazine