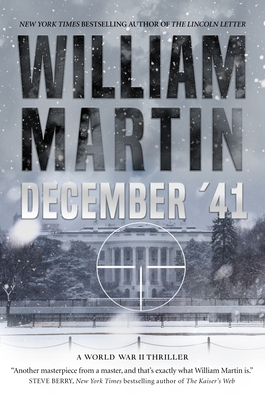 From New York Times bestselling author William Martin comes a WWII thriller as intense as The Day of the Jackal and as gripping as The Eye of the Needle. In December '41, Martin takes us on the ultimate manhunt, a desperate chase from Los Angeles to Washington, D. C., in the first weeks of the Second World War.

On the day after Pearl Harbor, shocked Americans gather around their radios to hear Franklin Roosevelt declare war. In Los Angeles, a German agent named Martin Browning is planning to kill FDR on the night he lights the National Christmas Tree. Who will stop him? Relentless FBI Agent Frank Carter? Kevin Cusack, a Hollywood script reader who also spies on the German Bund of Los Angeles, and becomes a suspect himself? Or Vivian Hopewell, the aspiring actress who signs on to play Martin Browning's wife and cannot help but fall in love with him?

The clock is ticking. The tracks are laid. The train of narrow escapes, mistaken identities, and shocking deaths is right on schedule. It's a thrilling ride that will sweep you from the back lots of Hollywood to the speeding Super Chief to that solemn Christmas Eve, when twenty thousand people gather on the South Lawn of the White House and the lives of Franklin Roosevelt and his surprise guest, Winston Churchill, hang in the balance.

“A remarkable story that will keep you reading late into the night.”
—Catherine Coulter, #1 New York Times bestselling author of Vortex

WILLIAM MARTIN is the New York Times bestselling author of over a dozen novels, an award-winning PBS documentary on the life of George Washington, and a cult-classic horror film, too. In novels like Back Bay, City of Dreams, The Lost Constitution, The Lincoln Letter, and Bound for Gold, he has told stories of the great and the anonymous of American history, and he’s taken readers from the deck of the Mayflower to 9/11. His work has earned him many accolades and honors, including the 2005 New England Book Award, the 2015 Samuel Eliot Morison Award, and the 2019 Robert B. Parker Award. He and his wife live near Boston, where he serves on several cultural and historical institutions’ boards, and he has three grown children.

“Martin concocts a devilishly complex and lusciously detail-rich thriller. . . Echoing Ken Follett's classic Eye of the Needle, Martin builds tension superbly while surrounding the assassin and his pursuer with a rich panoply of supporting players and backstories.”
—Booklist

“In December, 1941, FDR and Churchill are marked for death by a Nazi assassin. A remarkable story that will keep you reading late into the night. Be prepared to be shocked to your feet by the unexpected climax. Don't miss this one.”
— Catherine Coulter, #1 New York Times bestselling author of Vortex

“Another masterpiece from a master, and that’s exactly what William Martin is. A reader will never be in more capable hands."
—Steve Berry, New York Times bestselling author of The Kaiser's Web

“This pedal-to-the-floor historical spy thriller is a knockout! In the weeks immediately following Pearl Harbor, Old Hollywood collides with a secret Nazi cell and the result is a tautly written, adrenaline-filled roller coaster ride with the highest of stakes. Add in colorful characters, hairpin turns, and hold-your-breath suspense, and this has Do Not Miss stamped all over it.“
—Karen Robards, New York Times bestselling author of The Black Swan of Paris

“William Martin's thriller December '41 is a well-written, well-researched, and utterly engrossing work of historical fiction. I loved the rich characters, the noir-like dialogue and settings, and the backdrop of those terrifying days in the American Homeland during the start of World War Two. A great piece of writing that was a blast to read.”
—Mark Greaney, #1 New York Times bestselling author of The Gray Man

“December '41 is absolutely splendid, a cinematic thriller that takes us across the United States in the first days after Pearl Harbor. It places sharply observed heroes and an unforgettable villain at a unique moment in history, and reminded me of the great wartime movies. Bravo."
—Joseph Finder, New York Times bestselling author of House on Fire

“William Martin’s, December ’41 is a propulsive and masterful historical spy thriller which feels ominously contemporary. Written in the best Alfred Hitchcock film style crossed with the books of Graham Green and Ken Follett. The frenetic pace and story are phenomenal, filled with classic twists and turns. Agents turn into double agents and, then, triple agents; this thrilling read grips you by the throat and never lets go!”
—Andrew Mayne, #1 Amazon best- selling author of The Naturalist and The Girl Beneath The Sea

“In William Martin’s highly suspenseful historical thriller December ’41, America is reeling after the bombing of Pearl Harbor, and U.S. law enforcement at all levels understand that the Nazi threat is not just overseas. This is a gripping cat and mouse tale that follows a seasoned Nazi tracker as he races across the country, from glamorous, gritty Hollywood to the bustling streets of war time D.C, to try and catch a seasoned Nazi assassin before he can achieve his most critical mission - killing FDR. December ’41 is the ultimate page turner, I loved it!”
—Jane Healey, bestselling author of The Beantown Girls and The Secret Stealers

“William Martin is the consummate storyteller! His brilliant December '41 is a contemporary take on the classic spy thriller—It's Herman Wouk meets The Day of the Jackal, with the ticking time bomb expertise of Hitchcock—and it is irresistible. Instantly cinematic and endlessly entertaining, December '41 is an absolute page turner. Martin’s impeccable research shines through, seamlessly, in this historical look at old Hollywood, World War II, and the profound triumph of the human spirit.”
—Hank Phillippi Ryan, USA Today bestselling author of Her Perfect Life

“Richly imagined, deftly plotted and deeply researched, this atmospheric thriller captures the bygone world of the USA in the troubled days after Pearl Harbor while paying tribute to the great noir novels and films of our past. December '41 will delight fans of this gifted and versatile author while attracting a legion of new devotees. I became so engaged in reading this fast-as-a-bullet tale that I lost track of the time and missed an appointment. Be warned: Clear your schedule before you turn to page one.”
—Ralph Peters, author of Cain at Gettysburg and The War After Armageddon

“William Martin is one of the best fictional interpreters of history working today. His DECEMBER, '41 reveals the world-changing era that pulled the U.S. into wars and struggles that continue to shape all our lives well into the 21st Century. He reports it all, the heroes and villains, the fallen and the forlorn, the struggles of human beings across the global for freedom.”
—James Grady, New York Times bestselling author of 3 Days of the Condor

“Against the backdrop of perhaps the most momentous month in U.S. history, William Martin has crafted a first-class mystery. The detail is sharp and the pace breathless. An imaginative story, brilliantly told!”
—Ward Larsen, award-winning, USA Today bestselling author of Assassin’s Strike

“Reviving the best of L.A. noir and the heyday of Hollywood with slick dialogue, clever comebacks, and dogged detective work, December ’41 is a bullet train of thrills speeding to an unforgettable conclusion.”
—Historical Novels Review

"William Martin simply knows how to write. And he knows how to write a smash-up story with atmospheric touches so authentic you’ll forget you’re in the 21st century. The subject matter here is deadly serious, but the characters who make cameo appearances—big names from show biz in the 1940s—liven up the novel and make you feel like a Hollywood insider. December ’41 is packed with history, thrills, chills and clever plot twists. So sit down, stretch out, open the book and fall inside this wonderful adventure."
—Bookreporter