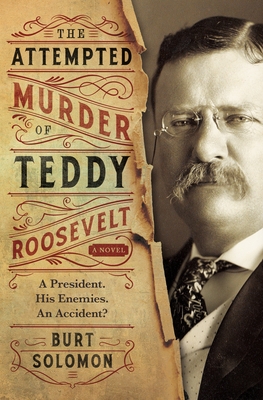 This is book number 2 in the The John Hay Mysteries series.

Theodore Roosevelt has been president for less than a year when his horse-drawn carriage is broadsided by an electric trolley. Roosevelt is thrown clear but his Secret Service bodyguard is killed instantly.

Roosevelt has earned enemies galore and is convinced of foul play. He sets John Hay, the secretary of state, to investigate. Hay will cross paths with Emma Goldman and J.P. Morgan to discover the truth… and along the way he will pick up a sidekick, the crusading journalist Nellie Bly.

Blending real events and novelistic logic, Hay uncovers a shocking solution that may protect the man who wants to transform the nation, but at the cost of upending the compass of his own life.

Burt Solomon is a contributing editor for The Atlantic and National Journal, where he has covered the White House and many other aspects of Washington life. In 1991 he won the Gerald R. Ford Prize for Distinguished Reporting on the Presidency. He is also the author of the acclaimed Where They Ain't, a history of baseball in the 1890s. Solomon, his wife, and their two children live inside the Beltway. The Murder of Willie Lincoln is his first novel.

“[Solomon has] a gift for mining fascinating nuggets from my city's past.”—George F. Will, columnist at The Washington Post

“Historian Solomon’s meticulous details and the real-life figures woven into the narrative make it both informative and entertaining.”—Kirkus Reviews

“Hay is a fallible, engaging character with interests in boxing and poetry as well as sleuthing, and his narration brings to life a time and place as it unravels a crime.”—Booklist

“… a splendid tale of mostly fiction set in the first year of TR’s service as president.”—New York Journal of Books

Praise for The Murder of Willie Lincoln
“Solomon offers a deeply imagined and entirely plausible account of the Lincoln White House at its saddest…You won’t guess whodunit until the final, suspenseful page.”—Doris Kearns Goodwin

“Well-plotted, beautifully researched and gripping to the final page.”—Daniel Stashower, author of The Hour of Peril: The Secret Plot to Murder Lincoln Before the Civil War

“Vivid, captivating, and, dare I say, seductively plausible.”—John Taliaferro, author of All the Great Prizes: The Life of John Hay, from Lincoln to Roosevelt

“The puzzle is plausibly immersive, the solution heartrendingly surprising…Solomon portrays Hay as an effective, likable sleuth and compelling political player.”—Booklist

“An engaging roman a clef…here’s hoping that Mr. Solomon finds something else for John Hay to apply his fertile mind.”—The Washington Times