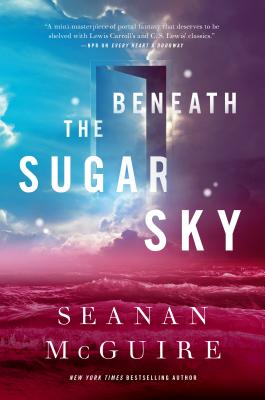 This is book number 3 in the Wayward Children series.

Beneath the Sugar Sky, the third book in McGuire's Wayward Children series, returns to Eleanor West's Home for Wayward Children in a standalone contemporary fantasy for fans of all ages. At this magical boarding school, children who have experienced fantasy adventures are reintroduced to the "real" world.

When Rini lands with a literal splash in the pond behind Eleanor West's Home for Wayward Children, the last thing she expects to find is that her mother, Sumi, died years before Rini was even conceived. But Rini can’t let Reality get in the way of her quest – not when she has an entire world to save! (Much more common than one would suppose.)

If she can't find a way to restore her mother, Rini will have more than a world to save: she will never have been born in the first place. And in a world without magic, she doesn’t have long before Reality notices her existence and washes her away. Good thing the student body is well-acquainted with quests...

A tale of friendship, baking, and derring-do.

The Wayward Children Series
Book 1: Every Heart a Doorway
Book 2: Down Among the Sticks and Bones
Book 3: Beneath the Sugar Sky
Book 4: In an Absent Dream

SEANAN McGUIRE is the author of the Hugo, Nebula, Alex, and Locus Award–winning Wayward Children series; the October Daye series; the InCryptid series; the delightfully dark Middlegame; and other works. She also writes comics for Marvel, darker fiction as Mira Grant, and younger fiction as A. Deborah Baker. Seanan lives in Seattle with her cats, a vast collection of creepy dolls, horror movies, and sufficient books to qualify her as a fire hazard. She won the 2010 John W. Campbell Award for Best New Writer, and in 2013 became the first person to appear five times on the same Hugo ballot.

"McGuire's delicious third [Wayward Children] book. Readers will be thrilled to see old friends and meet new ones in this scrumptious tale that emphasizes acceptance, kindness and the enduring value of friendship." —Publishers Weekly

Praise for Every Heart a Doorway

"Every Heart a Doorway by Seanan McGuire is one of the most extraordinary stories I've ever read." — V. E. Schwab, New York Times bestselling author of A Gathering of Shadows

"With Every Heart a Doorway, McGuire has created her own mini-masterpiece of portal fantasy — a jewel of a book that deserves to be shelved with Lewis Carroll's and C. S. Lewis' classics, even as it carves its own precocious space between them." — NPR

"This gothic charmer is a love letter to anyone who's ever felt out of place." — Publishers Weekly

"Seanan McGuire once again demonstrates her intimate knowledge of the human heart in a powerful fable of loss, yearning and damaged children." — Paul Cornell, author of London Falling and Witches of Lychford

"This gothic novel is ideal for fantasy fans who have longed for a world of their own, as well as readers looking for books with diverse casts." —Bookish

“Girl Interrupted meets Grimm's Fairy Tales. Let it in and it will touch your heart and open your mind.” —Geek Syndicate