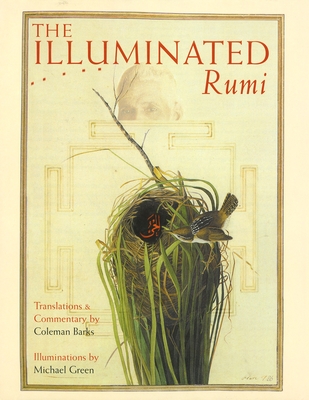 
Not On Our Shelves—Ships in 1-5 Days
Rise up nimbly and go on your strange journey to the ocean of meanings...

In the mid-thirteenth century, in a dusty marketplace in Konya, Turkey, a city where Muslim, Christian, Hindu, and Buddhist travelers mingled, Jelaluddin Rumi, a popular philosopher and scholar, met Shams of Tabriz, a wandering dervish.  Their meeting forever altered the course of Rumi's life and influenced the mystical evolution of the planet.  The bond they formed was everlasting--a powerful transcendent friendship that would flow through Rumi as some of the world's best-loved ecstatic poetry.

Rumi's passionate, playful poems find and celebrate sacred life in everyday existence.  They speak across all traditions, to all peoples, and today his relevance and popularity continue to grow.  In The Illuminated Rumi, Coleman Barks, widely regarded as the world's premier translator of Rumi's writings, presents some of his most brilliant work, including many new translations.  To complement Rumi's universal vision, Michael Green has worked the ancient art of illumination into a new, visually stunning form that joins typography, original art, old masters, photographs, and prints with sacred images from around the world.

The Illuminated Rumi is a truly groundbreaking collaboration that interweaves word and image: a magnificent meeting of ancient tradition and modern interpretation that uniquely captures the spiritual wealth of Rumi's teachings.  Coleman Barks's wise and witty commentary, together with Michael Green's art, makes this a classic guide to the life of the soul for a whole new generation of seekers.
Coleman Barks has published twelve books of Rumi's poetry, including the bestselling The Essential Rumi.  Barks lives in Athens, Georgia, and is a professor at the University of Georgia.

Michael Green is a critically acclaimed artist and illustrator whose books include Zen and the Art of the Macintosh, Unicornis, The Book of the Dragontooth, and The I-Ching Records.  He lives in Pennsylvania's Brandywine Valley.
"Rumi has, to the recent amazement of many people in the Western culture as well as the Islamic culture, been able to speak directly to contemporary readers.  One of the greatest pieces of good luck that has happened recently in American poetry is Coleman Barks's agreement to translate poem after poem of Rumi.  Rumi, like Kabir, is able to contain and continue intricate theological arguments and at the same time speak directly from the heart or to the heart.  Coleman's exquisite sensitivity to the flavor and turns of ordinary American speech has produced marvelous lines, full of flavor and Sufi humor, as well as the intimacy that is carried inside American speech at its best."
--Robert Bly