Sister and I from Victoria to London (Hardcover) 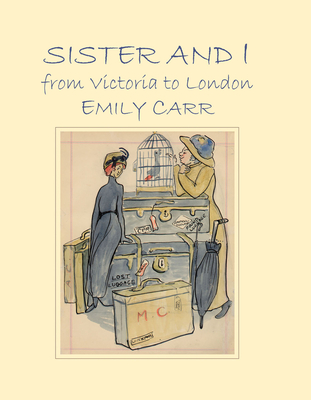 Sister and I from Victoria to London (Hardcover)


Special Order—Subject to Availability
(This book cannot be returned.)
Victoria, BC, July 11th 191. . . . With red eyes and a body guard of sniffing "faithfuls" attending us, we start on our long trip abroad. . . .


So begins Emily Carr's memoirs of her trip to England with her sister Alice. They travel across Canada by rail to board an ocean liner in Quebec City, meeting interesting characters and having many adventures along the way. They hike in "gloriously cool and beautiful" Glacier House, and encounter porcupines and wasps in otherwise "heavenly" Lake Louise.


They carry on to the "wonderful little town" of Medicine Hat, then Winnipeg, Montreal and "wonderful historic old" Quebec City, where they prepare for boarding the Empress of Ireland for Liverpool.


Sister and I presents Emily Carr's whimsical account of her trip across Canada, written and illustrated in her own hand, directly from Carr's original notebook. This one-of-a-kind book is introduced by Kathryn Bridge, who places it in context with Carr's life and works.
Beloved Canadian artist and writer Emily Carr (December 13, 1871 to March 2, 1945) was born in Victoria, British Columbia. She studied art in the US, England and France until 1911 when she moved back to British Columbia. Carr was most heavily influenced by the landscapes and First Nations cultures of British Columbia and Alaska. In the 1920s she came into contact with members of the Group of Seven and was later invited to submit her works for inclusion in a Group of Seven exhibition. They named her The Mother of Modern Arts about five years later.