Spirits of the Coast: Orcas in science, art and history (Hardcover) 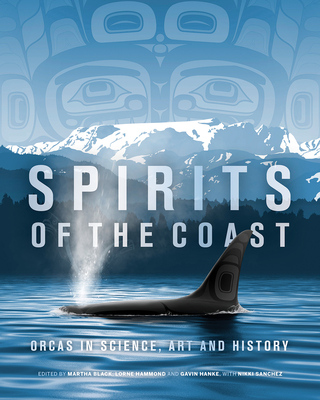 Spirits of the Coast: Orcas in science, art and history (Hardcover)

Spirits of the Coast brings together the work of marine biologists, Indigenous knowledge keepers, poets, artists, and storytellers, united by their enchantment with the orca.

Long feared in settler cultures as "killer whales," and respected and honored by Indigenous cultures as friends, family, or benefactors, orcas are complex social beings with culture and language of their own. With contributors ranging from Briony Penn to David Suzuki, Gary Geddes and Michael Nicoll Yahgulanaas, this collection brings together diverse voices, young and old, to explore the magic, myths, and ecology of orcas.

"In Spirits of the Coast...orca experts, artists, storytellers, and Indigenous wisdom keepers issue an invitation to understand, celebrate, and come together to protect these marvelous marine mammals." —Kristine Morris, Foreword Reviews

"This book is the perfect blend of science, history, art, folklore and culture. Orcas are a huge part of life on the west coast of Canada and Vancouver Island. The image of the Orca is ever-present. This book is a wonderful trip into the world of these magnificent creatures and what they have meant to us over time." —Charlotte Kinzie, Kinzie Things

"The book, which is both a history lesson and a proposal for the future, is packed with thoughtful insights, historical perspectives and traditional First Nations stories. It also visually shines, with a wide range of beautiful artwork and photography. It’s that inclusion of visual storytelling that makes this book so accessible — and a great addition to any coffee table or bookshelf." —Vancouver Sun

"Its luminous, large-format pages offer everything from Haida storytelling to marine biology, all to show our too-often-ignored kinship with this astonishing animal." —Brian Lynch, Georgia Straight

"This book is not just recalling the history of relationship between humans and orcas but is laying the groundwork for deciding, each of us, what that relationship could look like in the future." —Amy Reiswig, Focus on Victoria

"Anyone looking for an introduction to the history, science and cultural significance of the orca could do no better than to start here." —Daniel Francis, Ormsby Review

“This ‘literary and visual journey through past and possibility’ is probably the best literary bargain you'll find this year. . . . It juxtaposes gorgeous photos with sketches, poetry, Indigenous stories and first-hand experiences and observations of experts.” —Pacific Yachting