The Official Picture: The National Film Board of Canada's Still Photography Division and the Image of Canada, 1941-1971 (McGill-Queen's/Beaverbrook Canadian Foundation Studies in Art History #10) (Hardcover) 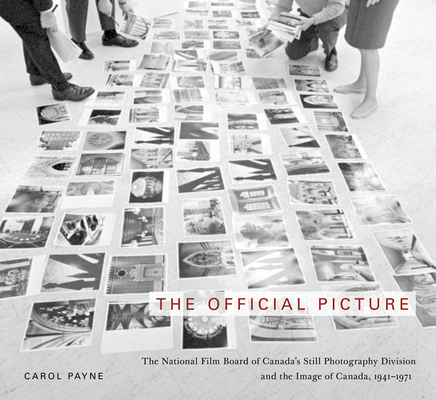 The Official Picture: The National Film Board of Canada's Still Photography Division and the Image of Canada, 1941-1971 (McGill-Queen's/Beaverbrook Canadian Foundation Studies in Art History #10) (Hardcover)


Special Order—Subject to Availability
Mandated to foster a sense of national cohesion The National Film Board of Canada's Still Photography Division was the country's official photographer during the mid-twentieth century. Like the Farm Security Administration and other agencies in the US, the NFB used photographs to serve the nation. Division photographers shot everything from official state functions to images of the routine events of daily life, producing some of the most dynamic photographs of the time, seen by millions of Canadians - and international audiences - in newspapers, magazines, exhibitions, and filmstrips. In The Official Picture, Carol Payne argues that the Still Photography Division played a significant role in Canadian nation-building during WWII and the two decades that followed. Payne examines key images, themes, and periods in the Division's history - including the depiction of women munitions workers, landscape photography in the 1950s and 60s, and portraits of Canadians during the Centennial in 1967 - to demonstrate how abstract concepts of nationhood and citizenship, as well as attitudes toward gender, class, linguistic identity, and conceptions of race were reproduced in photographs. The Official Picture looks closely at the work of many Division photographers from staff members Chris Lund and Gar Lunney during the 1940s and 1950s to the expressive documentary photography of Michel Lambeth, Michael Semak, and Pierre Gaudard, in the 1960s and after. The Division also produced a substantial body of Northern imagery documenting Inuit and Native peoples. Payne details how Inuit groups have turned to the archive in recent years in an effort to reaffirm their own cultural identity. For decades, the Still Photography Division served as the country's image bank, producing a government-endorsed "official picture" of Canada. A rich archival study, The Official Picture brings the hisotry of the Division, long overshadowed by the Board's cinematic divisions, to light.
Carol Payne is associate professor of art history at Carleton University and co-editor of The Cultural Work of Photography in Canada.
“The Official Picture marks an important turning point in studies on Canadian visual history by deconstructing images of government-approved Canadian nationalism and providing new questions for historians to ask of historic photographs. [It] should appeal to scholars of photography, film and cultural history, as well as historians in general, because of its balanced framework and analysis of the nuanced messages conveyed through photographs.” Jacqueline McIsaac, History of Photography

“The wealth and variety of Payne’s sources are exceptional, all of which she examines with intelligence and rigour. Through her remarkable understanding of the period and her compelling analysis of the images, Payne shows herself to be an accomplished art and cultural historian.” Annie Gérin, Département d’histoire de l’art, Université du Québec à Montréal

“Although the more well-known film activity of the NFB is widely studied, the photo division has been left out of discussions of film and art history alike. Through painstaking research and lucid analysis, this important work reconnects these areas, enriching discussions of documentary photography, film, and art history in Canada.” Zoë Druick, School of Communication, Simon Fraser University, and the author of Projecting Canada: Government Policy and Documentary Film at the National Film Board of Canada

“This is an excellent book in all respects. It remains an important resource on Guatemala and in the impact of the Spanish presence on the New World's native populations.” Journal of Cultural Geography