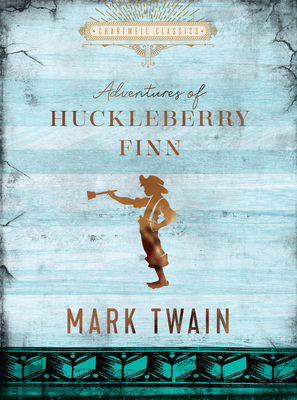 
Not On Our Shelves—Ships in 1-5 Days
Revel in Huck Finn’s adventure on the Mississippi River in The Adventures of Huckleberry Finn, the American masterpiece by Mark Twain.

A favorite among young readers and adults alike, Mark Twain’s Adventures of Huckleberry Finn, first published in 1884, is considered to be the author’s masterpiece, as well as one of the best American novels ever written.

In order to escape his abusive father, Huckleberry Finn fakes his own death. He meets up with the runaway slave Jim, and the two begin a new, carefree life on a raft traversing the Mississippi River. Despite their travels bringing them more trouble than expected and the fear of being returned to their old lives, Huck Finn and Jim form a bond that helps protect them from the judgments of a hypocritical society that claims to value civilization even as it benefits from the horror of slavery.

Many readers see Adventures of Huckleberry Finn as a children’s book because Huck is a boy. However, the book’s moral themes and metaphors are relevant for almost any age and situation. Huck rejects his Aunt Sally’s attempts to protect him in favor of entering the unknown wild. He simply values his own personal freedom and sense above all else—a quintessential American trait.

Complete and unabridged, this elegantly designed, jacketed hardcover edition features an introduction by American literature scholar and professor Steven Frye and a timeline of the life and times of Mark Twain.

Other titles in the Chartwell Classics Series include: Complete Fiction of H.P. Lovecraft; Complete Grimm’s Fairy Tales; Complete Novels of Jane Austen; Complete Sherlock Holme; Complete Tales & Poems of Edgar Allen Poe; Complete Works of William Shakespeare; Divine Comedy; Alice's Adventures in Wonderland and Other Tales; The Essential Tales of H.P. Lovecraft; The Federalist Papers; The Inferno; The Call of the Wild and White Fang; Moby Dick; The Odyssey; Pride and Prejudice; The Essential Grimm’s Fairy Tales; Emma; The Great Gatsby; The Secret Garden; Anne of Green Gables; The Essential Tales and Poems of Edgar Allan Poe; The Phantom of the Opera; The Communist Manifesto and Das Kapital; Republic; Frankenstein; Twenty Thousand Leagues Under the Sea; The Picture of Dorian Gray; Meditations; Wuthering Heights; Alice’s Adventures in Wonderland and Through the Looking-Glass; A Tales of Two Cities; Beowulf; The Strange Case of Dr. Jekyll and Mr. Hyde and Other Stories; Little Women

Mark Twain (1835–1910) grew up in Hannibal Missouri. He began his career as a journeyman printer and journalist. His youthful experiences along the Mississippi inspired some of his most famous works—and The Adventures of Huckleberry Finn. In addition to his well-known works of fiction, he was also a prolific travel writer. Among his best-known works is Life on the Mississippi. He was also a star of the lecture circuit.