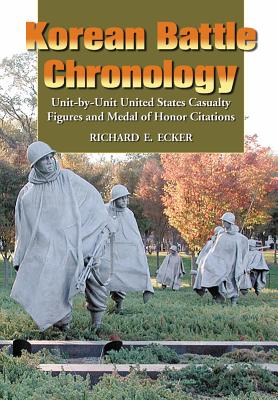 
Special Order—Subject to Availability
On June 28, 1950, five U.S. airmen died when their aircraft were shot down over Korea. They became the first U.S. casualties in a war that started three days earlier, when the North Korean People's Army crossed the 38th parallel and invaded the Republic of South Korea. The losses of U.S. military personnel that began with those five airmen would continue for 37 months and would ultimately total 33,985 American fatalities and more than 100,000 other American casualties. This is a history of U.S. involvement in the Korean War as told through those casualties--by the dates they occurred, their causes, their numbers and the units in which they served--and through all Medal of Honor citations (given in full). The work is subdivided into three units: The Peninsular War, Active Defense and The War of the Hills.
Retired scientist and educator Richard E. Ecker is a combat veteran of the Korean War. He lives in Downers Grove, Illinois.