Betrayal of Trust: The Collapse of Global Public Health (Paperback) 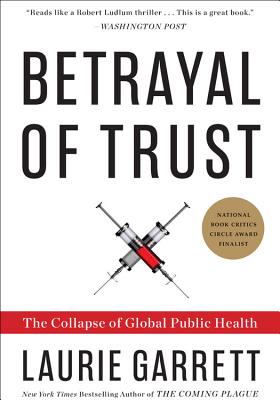 Betrayal of Trust: The Collapse of Global Public Health (Paperback)


Not On Our Shelves—Ships in 1-5 Days
In this "meticulously researched" account (New York Times Book Review), a Pulitzer Prize-winning author examines the dangers of a failing public health system unequipped to handle large-scale global risks like a coronavirus pandemic.
The New York Times bestselling author of The Coming Plague, Laurie Garrett takes on perhaps the most crucial global issue of our time in this eye-opening book. She asks: is our collective health in a state of decline? If so, how dire is this crisis and has the public health system itself contributed to it? Using riveting detail and finely-honed storytelling, exploring outbreaks around the world, Garrett exposes the underbelly of the world's globalization to find out if it can still be assumed that government can and will protect the people's health, or if that trust has been irrevocably broken.
"A frightening vision of the future and a deeply unsettling one . . . a sober, scary book that not only limns the dangers posed by emerging diseases but also raises serious questions about two centuries' worth of Enlightenment beliefs in science and technology and progress." -- Michiko Kakutani, The New York Times
Since 2004, Laurie Garrett has been a Senior Fellow for Global Health at the Council on Foreign Relations in New York. Garrett is the New York Times bestselling author of The Coming Plague: Newly Emerging Diseases in a World Out of Balance (1994) and Betrayal of Trust: The Collapse of Global Public Health (2000). She has appeared frequently on national television programs, including Nightline, PBS NewsHour, The Charlie Rose Show, and The Oprah Winfrey Show. She is the recipient of numerous honors, including a Pulitzer Prize and Peabody and Polk awards.
"Reads like a Robert Ludlum thriller ... This is a great book."—Washington Post

"On par with Rachel Carson's Silent Spring ... This chilling exploration of the decline of public health should be taken seriously by leaders and policymakers around the world."—Publishers Weekly