Stream This Next: 1,000 TV Shows to Suit Your Mood (Hardcover) 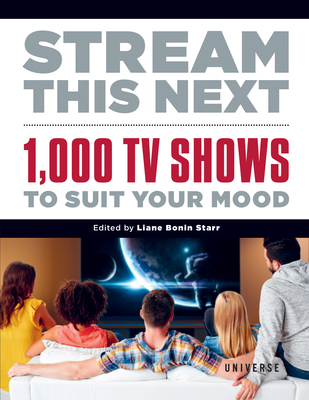 Stream This Next: 1,000 TV Shows to Suit Your Mood (Hardcover)


On Our Shelves Now at:
The explosion of streaming apps and new platforms has produced a deluge of new original programming; this curated guide aims to be the one-stop resource to help figure out what to watch next.

The growing volume of new television shows being released paired with the exponential proliferation of new streaming services make it increasingly hard to figure out what to watch. This new guide, spearheaded by television authority Liane Bonin Starr and an international team of critics, is a timely and welcome aid in winnowing the “must see” from the “don’t bother.” It is a curated selection of the most important and groundbreaking shows from past decades and the best new and buzzworthy series created in the age of streaming. It covers a wide range of genres across the spectrum and across various streaming services, from beloved favorites and classics to more obscure yet acclaimed foreign programs that are worth discov-ering, such as moody Scandinavian police procedurals and K-dramas. Organized by moods and moments, it is easy to find something romantic for date night, a dramedy to enjoy with BFFs, or sitcoms to binge during your next quarantine.
Liane Bonin Starr is a nationally recognized journalist, author, radio producer, and produced screenwriter. She has written numerous articles that have appeared in Entertainment Weekly, the Los Angeles Times, People, the Hollywood Reporter, and other publications. She is a member of the Television Critics Association and the American Society of Journalists and Authors.