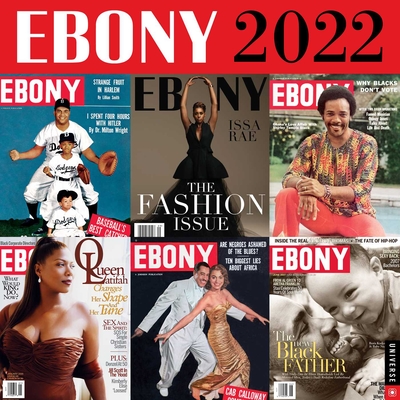 
Special Order—Subject to Availability
(This book cannot be returned.)
Ebony 2022 Wall Calendar celebrates 76 years of Ebony magazine. This collectible wall calendar will feature 36 of the most dynamic covers from this highly celebrated and revered magazine.

This calendar features covers from Ebony magazine, the first black-oriented magazine in the United States to attain national circulation. It includes some of the 20th century’s most respected African-American celebrities, newsmakers, athletes, influencers, and artists such as Queen Latifah, Diana Ross, Donna Summers, Toni Braxton, Quincy Jones, and more.
Other features include:
Ebony is a monthly magazine that focuses on news, culture, and entertainment. Founded in 1945, its target audience is the African–American community, and its coverage includes the lifestyles and accomplishments of influential black people, fashion, beauty, and politics.