The Art of Oz: Witches, Wizards, and Wonders Beyond the Yellow Brick Road (Hardcover) 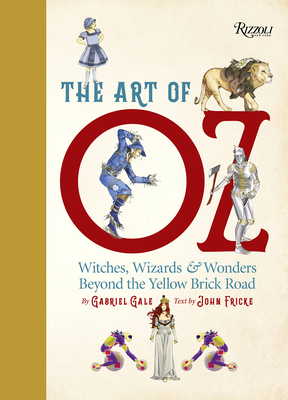 The Art of Oz: Witches, Wizards, and Wonders Beyond the Yellow Brick Road (Hardcover)


Special Order—Subject to Availability
In this must-have book for all fans of Oz big and small, artist and visionary Gabriel Gale brings to vivid life all the creatures from L. Frank Baum’s beloved series, from the iconic characters in The Wonderful Wizard of Oz to many others that are visualized here for the first time.

The Wonderful Wizard of Oz was the best-selling American children’s book of the twentieth century, and the classic 1939 movie of this quintessential American fairy tale left a permanent mark on the hearts and imaginations of devoted fans throughout the world. In THE ART OF OZ: WITCHES, WIZARDS, AND WONDERS BEYOND THE YELLOW BRICK ROAD artist and Oz archeologist Gabriel Gale brings to life all the creatures and inhabitants from L. Frank Baum’s beloved series, many illustrated here for the first time: wicked witches and their armies, mythical beasts, elemental fairies, robots, insects, one-legged and two-sided people, and many more sky, land, sea, and underground creatures. THE ART OF OZ also debuts the first-ever “Google Map” of the Land of Oz!
Gabriel Gale has mapped the country and animated all the creatures he found there.  He has sketched Emerald City the buildings and habitats of the enchanted Land. Through spectacular illustrations, in original and precise style, Gale portrays each character in detail, often with attention to anatomy,  structure,  size and scale.  Gale’s fantastical, vivid, and delightful renderings are also accompanied by excerpts and drawings from the fourteen books in Baum’s Oz series and the most famous inhabitants of Oz—Professor H.M. Woggle-Bug, T.E., Dorothy, the Cowardly Lion, the Scarecrow, the Tin Woodman, Toto, Glinda the Good, and the Wizard—add context to this magical endeavor This is the perfect book for the whole family to share and for anyone entranced by the fantasy and everlasting magic of Oz
Gabriel Gale is an architect and artist whose enchantment with the Oz books began in childhood. In 2017 and 2018, he published two books in his three-book series Ages of Oz, which launched his own conception of a 1,000-year Oz universe based on the characters and intentions of L. Frank Baum’s original books. John Fricke is a preeminent Oz historian; his past books include two about the entire Oz phenomenon and two about the famous MGM Wizard of Oz film. Michael Patrick Hearn is the author of the best-selling The Annotated Wizard of Oz and the world’s leading authority on L. Frank Baum and his Oz series.
"In The Art of Oz, illustrator Gabriel Gale offers his own take on the characters and creatures of the magical place. His fantastical renderings, often paired with Denslow’s and Neill’s inspiring originals, are split into chapters such as 'The Witches & Their Armies,' 'The Beasts,' and 'The Curiosities.' By the time you reach 'The Emerald City,' you’ll know you’re not in Kansas anymore." —AIR MAIL