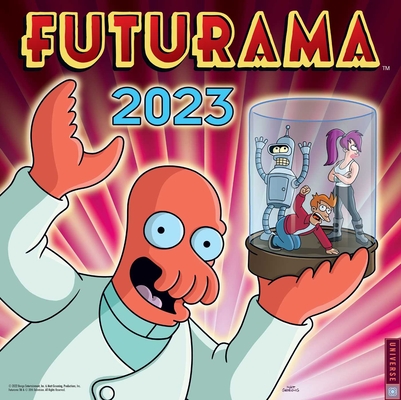 
Not On Our Shelves—Ships in 1-5 Days
(This book cannot be returned.)
Party like its 2999 with the crew of Planet Express and the Futurama™ 2023 Wall Calendar, featuring full-color photos of the cult classic television show’s beloved cast exploring the action-packed galaxy.

The cult classic television series is back with the official Futurama™ 2023 Wall Calendar, featuring full-color photos of the entire Planet Express crew from immature yet golden-hearted Fry to cycloptic captain Leela, foul-mouthed robot buddy Bender, and more!
Matt Groening, the creator and executive producer of the Emmy® Award-winning series The Simpsons, as well as creator of the cartoon strip "Life in Hell" and the animated FOX television series Futurama, is the man responsible for bringing animation back to primetime and creating an immortal nuclear family. Additionally, Groening formed Bongo Comics Group in 1993 and currently serves as publisher of The Simpsons and Futurama titles.