Philosophical Investigations into the Essence of Human Freedom (Paperback) 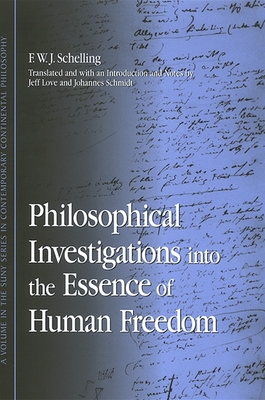 Philosophical Investigations into the Essence of Human Freedom (Paperback)


Not On Our Shelves—Ships in 1-5 Days
(This book cannot be returned.)
Jeff Love and Johannes Schmidt offer a fresh translation of Schelling's enigmatic and influential masterpiece, widely recognized as an indispensable work of German Idealism. The text is an embarrassment of riches-both wildly adventurous and somberly prescient. Martin Heidegger claimed that it was "one of the deepest works of German and thus also of Western philosophy" and that it utterly undermined Hegel's monumental Science of Logic before the latter had even appeared in print. Schelling carefully investigates the problem of evil by building on Kant's notion of radical evil, while also developing an astonishingly original conception of freedom and personality that exerted an enormous (if subterranean) influence on the later course of European philosophy from Schopenhauer and Kierkegaard through Heidegger to important contemporary theorists like Slavoj Z iz ek. This translation of Schelling's notoriously difficult and densely allusive work provides extensive annotations and translations of a series of texts (by Boehme, Baader, Lessing, Jacobi, and Herder), hard to find or previously unavailable in English, whose presence in the Philosophical Investigations is unmistakable and highly significant. This handy study edition of Schelling's masterpiece will prove useful for scholars and students alike.
At Clemson University, Jeff Love is Associate Professor of German and Russian and Johannes Schmidt is Associate Professor of German