The Best Worst Dad Jokes: All the Puns, Quips, and Wisecracks You Need to Torment Your Kids (Paperback) 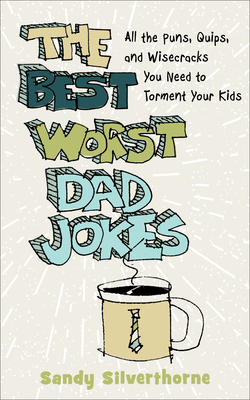 The Best Worst Dad Jokes: All the Puns, Quips, and Wisecracks You Need to Torment Your Kids (Paperback)


Not On Our Shelves—Ships in 1-5 Days
When a man becomes a dad, he takes on certain responsibilities: providing for his family, raising up his children to be good citizens--and telling the absolute worst jokes he can come up with. But dad jokes don't always come naturally, which is why Sandy Silverthorne created The Best Worst Dad Jokes. Filled with more than 500 groan worthy jokes to torment your kids, this collection makes it possible for dads to fill any moment of dead air with a joke that will have everyone within hearing distance rolling their eyes and edging away to avoid association with you. Jokes like . . .

I don't have a dad bod; I have a father figure.

I saw a sign that said Watch for Children. That sounded like a good trade to me.

When does a joke become a dad joke? When it's fully groan.

And hey, it's only downhill from there.
Sandy Silverthorne has been writing and illustrating books since 1988, with nearly 1 million copies sold. He is the award-winning creator of the Great Bible Adventure children's series, Crack Yourself Up Jokes for Kids, and Made You Laugh! Sandy has worked as a cartoonist, author, illustrator, actor, pastor, speaker, and comedian. Apparently, it's hard for him to focus. Connect with him at www.sandysilverthornebooks.com.