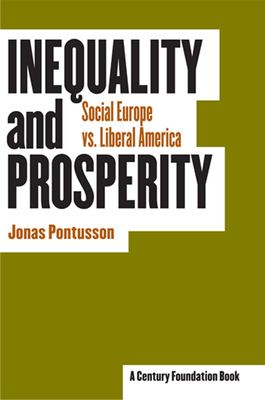 What are the relative merits of the American and European socioeconomic systems? Long-standing debates have heated up in recent years with the expansion of the European Union and increasingly sharp political and cultural differences between the United States and Europe. In Inequality and Prosperity, Jonas Pontusson provides a comparative overview of the two major models of labor markets and welfare systems in the advanced industrial world: the liberal capitalist system of the United States and Britain and the social market capitalism of northern Europe. These two models balance concerns of efficiency and equity in fundamentally different ways. In the 1990s the much-heralded forces of globalization (together with demographic changes and attendant political pressures) seemed to threaten the very existence of the social-market economies of Europe. Were the social compacts of Sweden and Germany outmoded? Would varieties of capitalism remain possible, or were labor-market and social-welfare arrangements converging on the U.S. norm? Pontusson opposes the notion of inevitable convergence: he believes that social-market economies can survive and indeed flourish in the contemporary world economy. He bases his argument on an enormous amount of highly specialized research on eighteen countries, using national-level data for the last thirty years. Among the areas he explores are labor-market dynamics, income distribution, employment performance, wage bargaining, firm-level performance, and the changing possibilities for the welfare state.

Jonas Pontusson is Professor of Politics at Princeton University. He is the author of The Limits of Social Democracy, also from Cornell, and coeditor of Unions, Employers, and Central Banks.