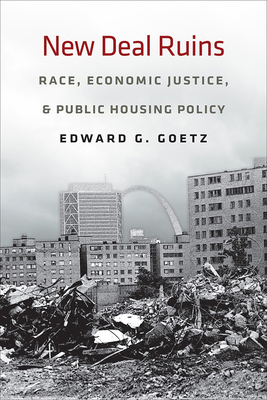 Public housing was an integral part of the New Deal, as the federal government funded public works to generate economic activity and offer material support to families made destitute by the Great Depression, and it remained a major element of urban policy in subsequent decades. As chronicled in New Deal Ruins, however, housing policy since the 1990s has turned to the demolition of public housing in favor of subsidized units in mixed-income communities and the use of tenant-based vouchers rather than direct housing subsidies. While these policies, articulated in the HOPE VI program begun in 1992, aimed to improve the social and economic conditions of urban residents, the results have been quite different. As Edward G. Goetz shows, hundreds of thousands of people have been displaced and there has been a loss of more than 250,000 permanently affordable residential units. Goetz offers a critical analysis of the nationwide effort to dismantle public housing by focusing on the impact of policy changes in three cities: Atlanta, Chicago, and New Orleans.Goetz shows how this transformation is related to pressures of gentrification and the enduring influence of race in American cities. African Americans have been disproportionately affected by this policy shift; it is the cities in which public housing is most closely identified with minorities that have been the most aggressive in removing units. Goetz convincingly refutes myths about the supposed failure of public housing. He offers an evidence-based argument for renewed investment in public housing to accompany housing choice initiatives as a model for innovative and equitable housing policy.

Edward G. Goetz is Professor of Urban and Regional Planning and Director of the Center for Urban and Regional Affairs at the University of Minnesota. He is the author of Clearing the Way: Deconcentrating the Poor in Urban America and Shelter Burden: Local Politics and Progressive Housing Policy and coeditor of The New Localism: Comparative Urban Politics in a Global Era.