Why France?: American Historians Reflect on an Enduring Fascination (Paperback) 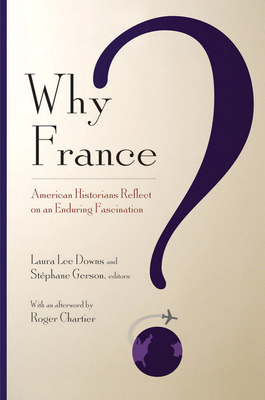 Why France?: American Historians Reflect on an Enduring Fascination (Paperback)

France has long attracted the attention of many of America's most accomplished historians. The field of French history has been vastly influential in American thought, both within the academy and beyond, regardless of France's standing among U.S. political and cultural elites. Even though other countries, from Britain to China, may have had a greater impact on American history, none has exerted quite the same hold on the American historical imagination, particularly in the post-1945 era.

To gain a fresh perspective on this passionate relationship, Laura Lee Downs and St phane Gerson commissioned a diverse array of historians to write autobiographical essays in which they explore their intellectual, political, and personal engagements with France and its past. In addition to the essays, Why France? includes a lengthy introduction by the editors and an afterword by one of France's most distinguished historians, Roger Chartier. Taken together, these essays provide a rich and thought-provoking portrait of France, the Franco-American relationship, and a half-century of American intellectual life, viewed through the lens of the best scholarship on France.