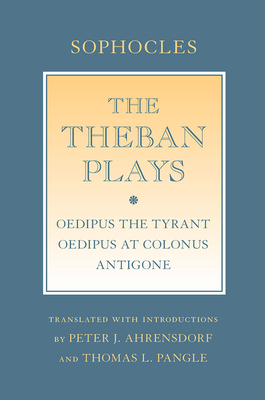 The timeless Theban tragedies of Sophocles--Oedipus the Tyrant, Oedipus at Colonus, and Antigone--have fascinated and moved audiences and readers across the ages with their haunting plots and their unforgettable heroes and heroines. Now, following the best texts faithfully, and translating the key moral, religious, and political terminology of the plays accurately and consistently, Peter J. Ahrensdorf and Thomas L. Pangle allow contemporary readers to study the most literally exact reproductions of precisely what Sophocles wrote, rendered in readily comprehensible English.These translations enable readers to engage the Theban plays of Sophocles in their full, authentic complexity, and to study with precision the plays' profound and enduring human questions. In the preface, notes to the plays, and introductions, Ahrensdorf and Pangle supply critical historical, mythic, and linguistic background information, and highlight the moral, religious, political, philosophic, and psychological questions at the heart of each of the plays. Even readers unfamiliar with Greek drama will find what they need to experience, reflect on, and enjoy these towering works of classical literature.

Peter J. Ahrensdorf is James Sprunt Professor of Political Science and Affiliated Professor of Classics at Davidson College. He is the author of Homer on the Gods and Human Virtue: Creating the Foundations of Classical Civilization, Greek Tragedy and Political Philosophy: Rationalism and Religion in Sophocles' Theban Plays, and The Death of Socrates and the Life of Philosophy: An Interpretation of Platos Phaedo.Thomas L. Pangle is Joe R. Long Chair in Democratic Studies in the Department of Government and Co-Director of the Thomas Jefferson Center for the Study of Core Texts and Ideas at the University of Texas at Austin. He is the author of many books, most recently Aristotle's Teaching in The Politics, and editor of books including The Roots of Political Philosophy: Ten Forgotten Socratic Dialogues, also from Cornell. Ahrensdorf and Pangle are coauthors of Justice among Nations: On the Moral Basis of Power and Peace.