From Reliable Sources: An Introduction to Historical Methodology (Paperback) 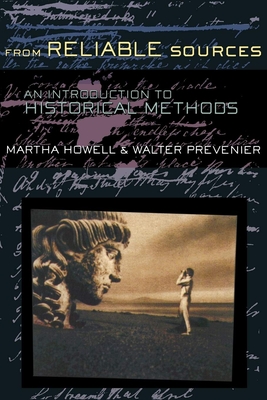 From Reliable Sources: An Introduction to Historical Methodology (Paperback)

From Reliable Sources is a lively introduction to historical methodology, an overview of the techniques historians must master in order to reconstruct the past. Its focus on the basics of source criticism, rather than on how to find references or on the process of writing, makes it an invaluable guide for all students of history and for anyone who must extract meaning from written and unwritten sources.

Martha Howell and Walter Prevenier explore the methods employed by historians to establish the reliability of materials; how they choose, authenticate, decode, compare, and, finally, interpret those sources. Illustrating their discussion with examples from the distant past as well as more contemporary events, they pay particular attention to recent information media, such as television, film, and videotape.

The authors do not subscribe to the positivist belief that the historian can attain objective and total knowledge of the past. Instead, they argue that each generation of historians develops its own perspective, and that our understanding of the past is constantly reshaped by the historian and the world he or she inhabits.

A substantially revised and updated edition of Prevenier's Uit goede bron, originally published in Belgium and now in its seventh edition, From Reliable Sources also provides a survey of western historiography and an extensive research bibliography.

Martha Howell is Professor of History at Columbia University. Her previous books include The Marriage Exchange: Property, Social Place, and Gender in Cities of the Low Countries. Walter Prevenier is Emeritus Professor of History at the University of Ghent (Belgium) and the author or coauthor of numerous books, including The Promised Lands: The Low Countries under Burgundian Rule.