Yesterday's Tomorrows: Past Visions of the American Future (Paperback) 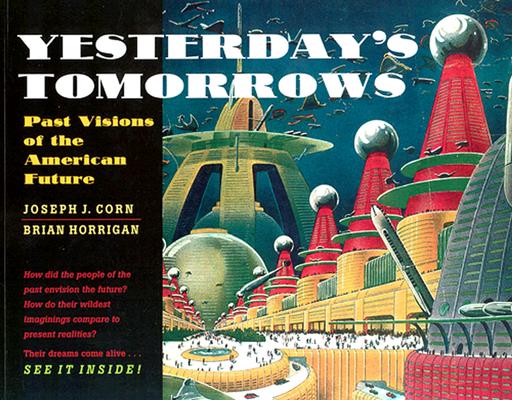 Yesterday's Tomorrows: Past Visions of the American Future (Paperback)

Enormous skyscrapers will house residents and workers who happily go for weeks without setting foot on the ground. Streamlined, hurricane-proof houses will pivot on their foundations like weather vanes. The family car will turn into an airplane so easily that a woman can do it in five minutes. Our wars will be fought by robots. And our living room furniture--waterproof, of course--will clean up with a squirt from the garden hose.

In Yesterday's Tomorrows Joseph J. Corn and Brian Horrigan explore the future as Americans earlier in the last century expected it to happen. Filled with vivid color images and lively text, the book is eloquent testimony to the confidence--and, at times, the naive faith--Americans have had in science and technology. The future that emerges here, the authors conclude, is one in which technology changes, but society and politics usually do not.

The authors draw on a wide variety of sources--popular-science magazines, science fiction, world fair exhibits, films, advertisements, and plans for things only dreamed of. From Jules Verne to the Jetsons, from a 500-passenger flying wing to an anti-aircraft flying buzz-saw, the vision of the future as seen through the eyes of the past demonstrates the play of the American imagination on the canvas of the future.

Joseph J. Corn is senior lecturer in the department of history at Stanford University. He is the author of The Winged Gospel: America's Romance with Aviation, 1900-1950. Brian Horrigan is a curator with the Minnesota Historical Society in St. Paul.Originally published in 1984 to accompany an exhibition by the same name organized and circulated by the Smithsonian Institution Traveling Exhibition Service.