Herbert A. Simon: The Bounds of Reason in Modern America (Hardcover) 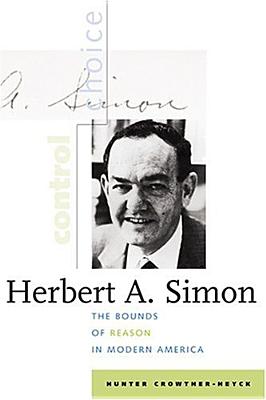 Herbert A. Simon: The Bounds of Reason in Modern America (Hardcover)

Rarely does the world see as versatile a figure as Herbert Simon. A Nobel laureate in economics, he was an accomplished political scientist, winner of a lifetime achievement award from the American Psychological Association, and founder of the Department of Computer Science at Carnegie Mellon University. In all his work in all these fields, he pursued a single goal: to create a science that could map the bounds of human reason and so enlarge its role in human affairs.

Hunter Crowther-Heyck uses the career of this unique individual to examine the evolution of the social sciences after World War II, particularly Simon's creation of a new field, systems science, which joined together two distinct, powerful approaches to human behavior, the sciences of choice and control. Simon sought to develop methods by which human behavior, specifically human problem-solving, could be modeled and simulated. Regarding mind and machine as synonymous, Simon applied his models of human behavior to many other areas, from public administration and business management to artificial intelligence and the design of complex social and technical systems.

In this informed and discerning study, Crowther-Heyck explores Simon's contributions to science and their influences on modern life and thought. For historians of science, social science, and technology, and for scholars of twentieth-century American intellectual and cultural history, this account of Herbert Simon's life and work provides a rich and valuable perspective.

Hunter Crowther-Heyck is an assistant professor of history of science at the University of Oklahoma and former exhibits curator at the National Library of Medicine.