The Great Society: A Play (Paperback) 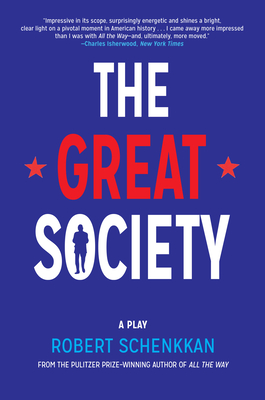 The Great Society: A Play (Paperback)


Special Order—Subject to Availability
Impressive in its scope, surprisingly energetic and shines a bright, clear light on a pivotal moment in American history . . . I came away more impressed than I was with All the Way--and, ultimately, more moved.--Charles Isherwood, New York Times The tumultuous beginning of Lyndon Johnson's presidency that Robert Schenkkan presented in the multiple Tony-winning All the Way continues in part two, The Great Society. The play had its world premiere at the Oregon Shakespeare Festival in July 2014, directed by Bill Rauch and starring Jack Willis, and ran at the Seattle Repertory Theatre before a planned Broadway transfer in 2016. In the years from 1965 to 1968, LBJ struggles to fight a "war on poverty" even as his war in Vietnam spins out of control. Besieged by political opponents, Johnson marshals all his political wiles to try to pass some of the most important social programs in U.S. history, while the country descends into chaos over the war and backlash against civil rights. In the tradition of the great multi-part Shakespearian historical plays, The Great Society is an unflinching examination of the morality of power.
Robert Schenkkan is a Pulitzer Prize-, Tony Award-, and Writer s Guild Award-winning author of stage, television, and film. He has been nominated for two Emmys and is the author of twelve original full-length plays, two musicals, and a collection of one-act plays. He co-wrote the feature film "The Quiet American" and his television credits include "The Pacific," "The Andromeda Strain" and "Spartacus." His most recent play is "All the Way."