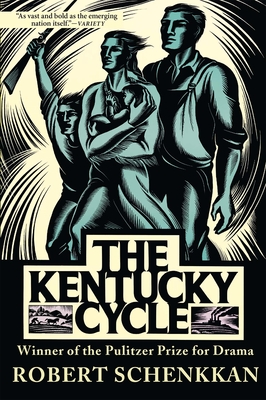 
Not On Our Shelves—Ships in 1-5 Days
In this series of nine short plays, Pulitzer Prize-winning playwright Robert Schenkkan has created a mesmerizing epic saga of rural Kentucky and an unblinking look at the truth behind our American mythology. Spanning two centuries and seven generations, this is the story of three families whose lives are irrevocably intertwined. From the darker realities of our pioneer heritage to the bloody lessons of the Civil War, from the inspiring battles between Union coal miners and deal-making management to the harsh environmental legacy of strip-mining, this fascinating work chronicles the lives of people who use any means possible to carve out a better place for themselves in an often brutal, unpredictable world. A remarkable theatrical event, The Kentucky Cycle is a compelling and unsentimental look at the men and women who founded this country and a powerful allegory for our times.
Robert Schenkkan is a Pulitzer Prize-, Tony Award-, and Writers Guild Award-winning author of stage, television, and film. He has been nominated for two Emmys and is the author of thirteen original full-length plays, two musicals, and a collection of one-act plays. He cowrote the feature film The Quiet American, and his television credits include The Pacific, The Andromeda Strain, and Spartacus. His most recent play is The Great Society.