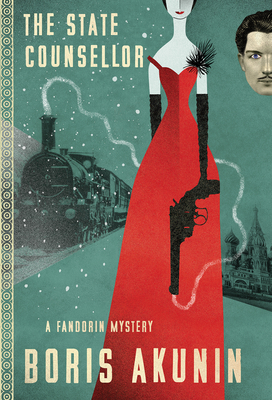 From the writer who invented the popular Russian crime novel, Boris Akunin, a gripping tale of political subterfuge and murder in turn-of-the-century Moscow featuring the inimitable hero Erast Fandorin

Since the publication of The Winter Queen, a New York Times Notable Book and the first mystery featuring Erast Fandorin, Boris Akunin's historical mystery series has become a worldwide sensation, selling millions of copies and propelling Akunin into the ranks of Russia's most widely read contemporary novelists. The first new Fandorin novel available to an American audience in a decade, The State Counsellor tests the handsome diplomat-detective's guile and integrity like no mystery before.

Russia, 1891. The new governor-general of Siberia has been secreted away on a train from St. Petersburg to Moscow. A blizzard rages outside as a mustachioed official climbs aboard near the city; with his trademark stutter, he introduces himself as State Counsellor Erast Fandorin. He then thrusts a dagger inscribed with the initials CG into the governor-general's heart and, tearing off his mustache, escapes out the carriage window. The head of the Department of Security soon shows up at the real Fandorin's door and arrests him for murder. The only way to save his reputation is to find CG--and the government mole who is feeding the group information. Can Fandorin survive corruption among his fellow officials, the fearlessness of an unknown enemy, and the advances of a sultry young nihilist with his morals intact? The State Counsellor is a colorful entertainer from a master of the sly historical romp.

Boris Akunin is the pen name of Grigory Chkhartishvili, who was born in the Republic of George in 1956. A philologist, critic, essayist, and translator of Japanese, Akunin published his first detective novel in 1998 and has gone on to become one of the most widely read authors in Russia. He is the author of the Fandorin mysteries, including The Winter Queen, which was a finalist for the CWA Silver Dagger Award, and the Sister Pelagia series. He lives in London, Paris, and Andalusia.