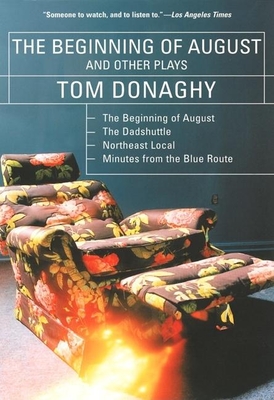 
Special Order—Subject to Availability
These four plays prove The Village Voice's acclaim that Tom Donaghy has mastered the Chekhovian tactic of having people say everything except what's on their mind. From the story of a young man trying to find order in a world in which he's had an affair with another man days after his wife left him and their infant daughter, to the emotional undercurrents of quiet, hard-working families faced with the reality that the lives they had envisioned for themselves are vastly different than the ones they are living, The Beginning of August and Other Plays showcases Donaghy's exceptional ability to bring to the surface the emotional undercurrents of everyday people. Tom Donaghy has that marvelous ability to be acutely funny and moving at the same time. Tom Donaghy's plays reveal a truth not only about good writing but why good playwriting reveals a complexity impossible in any other form. These are masterful works. -- Wendy Wasserstein, author of The Heidi Chronicles; Donaghy is a genius with fragmentation, with details so small that it comes as a shock to discover how sufficient they really are. Like the wiry pins piercing a grenade's shell, his scenes have similar -- and far more dangerous -- energy. -- The Boston Globe; Tom Donaghy's plays are tender and lyrical: he has an acute eye and a sharp ear. He explores the everyday lives of ordinary Americans and makes them glow. His work is often moving and always beautiful. -- Andre Bishop, Artistic Director, Lincoln Center Theater.