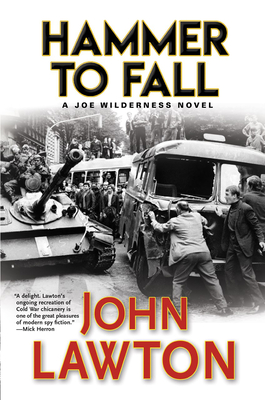 The third Joe Wilderness spy thriller from a master of the genre, moving from icy Finland to tumultuous Cold War Prague, Hammer to Fall is a tale of vodka smuggling and a legendary female Red Army general who is playing a dangerous game

It's London, the swinging sixties, and by all rights MI6 spy Joe Wilderness should be having as good a time as James Bond. But alas, his postings are more grim than glamorous. Luckily, Wilderness has a knack for doing well for himself even in the most unpromising postings, though this has gotten him into hot water in the past. A coffee-smuggling gig in divided Berlin was a steady money-maker but things went pear-shaped when he had to smuggle a spy back to the KGB instead. In the wake of what became an embarrassing disaster for MI6, Wilderness is reprimanded with a posting to remote northern Finland, under the guise of a cultural exchange program to promote Britain abroad. Bored by his work, with nothing to spy on, Wilderness finds another way to make money, this time by smuggling vodka across the rather porous border into the USSR. He strikes a deal with his old KGB pal Kostya, who explains to him there is, no joke, a vodka shortage in the Soviet Union, following a grain famine caused by Khrushchev's new agricultural policies. But there is something fishy about why Kostya has suddenly turned up in Finland--and MI6 intelligence from London points to a connection to the mining of cobalt in the region, a critical component in the casing of the atomic bomb. Wilderness's posting is getting more interesting by the minute, but more dangerous too.

Moving from the no-man's-land of Cold War Finland to the wild days of the Prague Spring, and populated by old friends (including Inspector Troy) and old enemies alike, Hammer to Fall is a gripping tale of deception and skullduggery, of art and politics, a page-turning story of the always riveting life of the British spy.

John Lawton has written eight previous Inspector Troy thrillers, two novels starring Joe Wilderness, one standalone novel, and a volume of history. His novels have been named Best Books of the Year by the New York Times, Los Angeles Times, and New York Times Book Review. He lives in England and Italy.