When the Stars Begin to Fall: Overcoming Racism and Renewing the Promise of America (Hardcover) 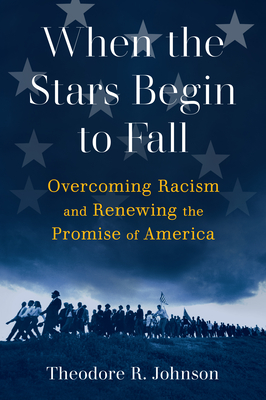 When the Stars Begin to Fall: Overcoming Racism and Renewing the Promise of America (Hardcover)

A bold, thought-provoking pathway to the national solidarity that could, finally, address the ills of racism in America

"Racism is an existential threat to America," Theodore R. Johnson declares at the start of his profound and exhilarating book. It is a refutation of the American Promise enshrined in our Constitution that all men and women are inherently equal. And yet racism continues to corrode our society. If we cannot overcome it, Johnson argues, while the United States will remain as a geopolitical entity, the promise that made America unique on Earth will have died.

When the Stars Begin to Fall makes a compelling, ambitious case for a pathway to the national solidarity necessary to mitigate racism. Weaving memories of his own and his family's multi-generational experiences with racism, alongside strands of history, into his elegant narrative, Johnson posits that a blueprint for national solidarity can be found in the exceptional citizenship long practiced in Black America. Understanding that racism is a structural crime of the state, he argues that overcoming it requires us to recognize that a color-conscious society--not a color-blind one--is the true fulfillment of the American Promise.

Fueled by Johnson's ultimate faith in the American project, grounded in his family's longstanding optimism and his own military service, When the Stars Begin to Fall is an urgent call to undertake the process of overcoming what has long seemed intractable.

Theodore R. Johnson is a Senior Fellow and Director of the Fellows Program at the Brennan Center for Justice at the NYU School of Law, where he undertakes research on race, politics, and American identity. Prior to joining the Brennan Center, he was a National Fellow at New America and a Commander in the United States Navy, serving for twenty years in a variety of positions, including as a White House Fellow in the first Obama administration and as speechwriter to the Chairman of the Joint Chiefs of Staff. His work on race relations has appeared in prominent national publications across the political spectrum, including the New York Times Magazine, the Atlantic, the Washington Post, the Wall Street Journal, and National Review, among others.
For This Book...
Video