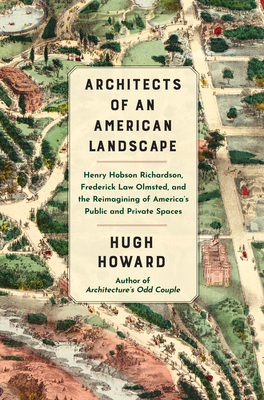 
Not On Our Shelves—Ships in 1-5 Days
A dual portrait of America's first great architect, Henry Hobson Richardson, and her finest landscape designer, Frederick Law Olmsted--and their immense impact on America

As the nation recovered from a cataclysmic war, two titans of design profoundly influenced how Americans came to interact with the built and natural world around them through their pioneering work in architecture and landscape design.

Frederick Law Olmsted is widely revered as America's first and finest parkmaker and environmentalist, the force behind Manhattan's Central Park, Brooklyn's Prospect Park, Biltmore's parkland in Asheville, dozens of parks across the country, and the preservation of Yosemite and Niagara Falls. Yet his close friend and sometime collaborator, Henry Hobson Richardson, has been almost entirely forgotten today, despite his outsized influence on American architecture--from Boston's iconic Trinity Church to Chicago's Marshall Field Wholesale Store to the Shingle Style and the wildly popular "open plan" he conceived for family homes. Individually they created much-beloved buildings and public spaces. Together they married natural landscapes with built structures in train stations and public libraries that helped drive the shift in American life from congested cities to developing suburbs across the country.

The small, reserved Olmsted and the passionate, Falstaffian Richardson could not have been more different in character, but their sensibilities were closely aligned. In chronicling their intersecting lives and work in the context of the nation's post-war renewal, Hugh Howard reveals how these two men created original all-American idioms in architecture and landscape that influence how we enjoy our public and private spaces to this day.

Hugh Howard is the author of numerous books on architecture and design, including Architecture's Odd Couple; Dr. Kimball and Mr. Jefferson; Thomas Jefferson: Architect; Houses of the Founding Fathers; and a memoir, House-Dreams. He lives in New Hampshire.