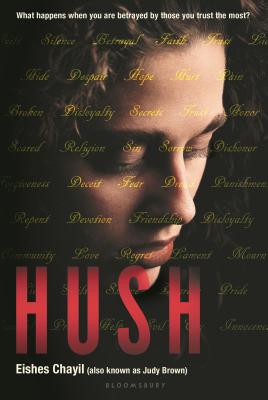 Perfect for fans of Unorthodox, this emotionally haunting story--one of both humor and depth--is of sexual abuse within the secluded orthodox Jewish community in Brooklyn.

Inside the closed community of Brooklyn, where most Chassidim live, the rules of life are determined by an ancient script written thousands of years before--and abuse has never been a part of it. But when thirteen-year-old Gittel learns her best friend has been sexually assaulted by one of her own family members, her the adults in her community try to convince Gittel, and themselves, that nothing happened. Forced to remain silent, Gittel begins to question everything she was raised to believe.

A nuanced exploration of a complex world, one of understanding and horror, this story illuminates the conflict between yesterday's traditions and today's reality.

EISHES CHAYIL is a pseudonym meaning woman of valor, chosen by JUDY BROWN when Hush was first published because of feared backlash from her community. Since publication, Judy's identity has been revealed, she has left the Chassidic community, and she has been profiled in The New York Times Magazine. Judy was raised in a world of Chassidic schools, synagogues, and summer camps and is a direct descendant of the major founders of and leaders in the Chassidic world. She holds a master's degree in creative writing and has worked as a journalist for several international Orthodox newspapers. She lives in New York City.

“I couldn’t put Hush down. Gripping, fascinating and poignant, the book is bravely written. . . .An extremely well-crafted story that keeps you turning pages.” —Teenreads.com

“An extremely well-crafted story that keeps you turning pages.” —Teenreads.com