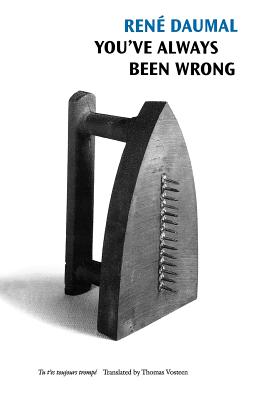 
Not On Our Shelves—Ships in 1-5 Days
(This book cannot be returned.)
You’ve Always Been Wrong is a collection of prose and poetic works by the French writer René Daumal (1908–1944). A fitful interloper among the Surrealists, Daumal rejected all forms of dogmatic thought, whether religious, philosophical, aesthetic, or political. Much like the Surrealists (and French theorists of more recent decades), Daumal saw in the strict forms and certainties of traditional metaphysics a type of thought that enslaves people even as it pretends to liberate them. These “cadavers of thought,” Daumal wrote with youthful bravado, “must be met with storms of doubt, blasphemes, and kerosene for the temples.”  Daumal tied Surrealism with mystical traditions. A devoted student of Eastern religions, philosophy, and literature, he combined his skepticism about Western metaphysics with a mystic’s effort to maintain intense wakefulness to the present moment and to the irreducible particularity of all objects and experience. Such wakefulness, according to Daumal, leads inevitably to an overwhelming (and redemptive) “vision of the absurd.” Daumal’s important place in French culture of the late 1920s and 1930s has been assured by both his writings and his role as cofounder of the avant-garde journal Le Grand Jeu. Written between 1928 and 1930, You’ve Always Been Wrong reveals Daumal’s thought as it was coalescing around the rejection of Western metaphysics and the countervailing allure of Eastern mysticism. Thomas Vosteen’s nuanced translation provides English-language readers with a provocative introduction to this iconoclastic author.
Thomas Vosteen has taught French language and literature for over twenty-five years, during which time he has also served as a freelance interpreter for the U.S. Department of State. He is currently an assistant professor of French at Eastern Michigan University.