Epic Wanderer: David Thompson and the Mapping of the Canadian West (Paperback) 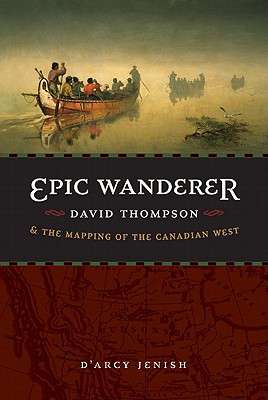 Epic Wanderer: David Thompson and the Mapping of the Canadian West (Paperback)


Not On Our Shelves—Ships in 1-5 Days
Epic Wanderer, the first full-length biography of mapmaker David Thompson (1770–1857), is set in the late eighteenth and early nineteenth centuries against the broad canvas of dramatic rivalries between the United States and British North America, between the Hudson’s Bay Company and its Montreal-based rival, the North West Company, and among the various First Nations thrown into disarray by the advent of guns, horses, and alcohol.
Less celebrated than his contemporaries Meriwether Lewis and William Clark, Thompson spent nearly three decades, beginning in 1784, surveying and mapping more than 1.2 million square miles of largely uncharted Indian territory. Traveling across the prairies, over the Rockies, and on to the Pacific, Thompson transformed the raw data of his explorations into a map of the Canadian West. Measuring ten feet by seven feet and exhibiting astonishing accuracy, the map became essential to the politicians and diplomats who would decide the future of the rich and promising lands of the West. Yet its creator worked without personal glory and died in penniless obscurity.
Drawing extensively on Thompson’s personal journals and illustrated with his detailed sketches, intricate notebook pages, and the map itself, Epic Wanderer charts the life of a man who risked everything in the name of scientific advancement and exploration.
D’Arcy Jenish is the author of Indian Fall: The Last Great Days of the Plains Cree and the Blackfoot Confederacy and the best-selling The Stanley Cup: One Hundred Years of Hockey at Its Best.
"Well illustrated and served well by a thorough bibliography, this imaginative reconstruction will whet readers' appetites to seek out the copious literature on Thompson, the 'epic wanderer.'"—Choice

“Now and again a book comes along that simply transcends geographical limits. Epic Wanderer is such a book. . . . Epic Wanderer, like the man himself, covers a lot of ground and does so very well. If you'd like to purchase just one biography on David Thompson, make it this one.”—American Surveyor

"David Thompson was an important, if little known, explorer of the Canadian West. . . . Jenish tells this remarkable man's story from the journal Thompson kept throughout his life and the narrative he wrote in his old age. . . . We view the daunting hardships facing a fur trader working far beyond white settlement."—Journal of the West

“Jenish presents a lively version of the explorer's adventures, detailing the hardships of life on the trail, Thompson's interactions with aboriginal peoples, and the vast country he traversed.”—Oregon Historical Quarterly