The World of Yesterday (Paperback) 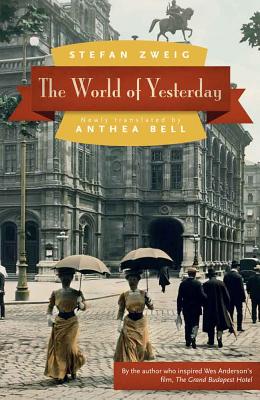 The World of Yesterday (Paperback)

By the author who inspired Wes Anderson’s film, The Grand Budapest Hotel

Written as both a recollection of the past and a warning for future generations, The World of Yesterday recalls the golden age of literary Vienna—its seeming permanence, its promise, and its devastating fall.

Surrounded by the leading literary lights of the epoch, Stefan Zweig draws a vivid and intimate account of his life and travels through Vienna, Paris, Berlin, and London, touching on the very heart of European culture. His passionate, evocative prose paints a stunning portrait of an era that danced brilliantly on the edge of extinction.

This new translation by award-winning Anthea Bell captures the spirit of Zweig’s writing in arguably his most revealing work.

Stefan Zweig (1881–1942) was an Austrian novelist, journalist, biographer, and playwright prominent in the 1920s and 1930s. He is the author of several books, including the novels Beware of Pity and Confusion of Feelings and the biography Conqueror of the Seas: The Story of Magellan. Anthea Bell has translated many French, German, Danish, and Polish literary works into English. Her translations include Wladyslaw Szpilman’s memoir The Pianist, W. G. Sebald’s Austerlitz, and numerous works of children's literature.
"The autobiography of the internationally famous biographer and dramatist is a chronicle of three ages: the golden days of Vienna that ended with World War I; that war and its aftermath; and the Hitler years. Three ages do come to life in Zweig's book."—Publishers Weekly

"When I opened it, I immediately felt that rare thrill one experiences when meeting a great book."—Newsday.com

“The World of Yesterday is one of the greatest memoirs of the twentieth century, as perfect in its evocation of the world Zweig loved as it is in its portrayal of how that world was destroyed.”—David Hare, award–winning playwright and director of film and theater

“The World of Yesterday is ostensibly an autobiography, but it is much more than that. In this remarkably fine new translation, Anthea Bell perfectly captures Stefan Zweig’s glorious evocation of a lost world, Vienna’s golden age, in which he grew up and flourished.”—Ronald Harwood, award-winning author, playwright, and screenwriter

“The very success with which this book evokes both the beauty of the past and the fatality of its passing is what gives it tragic effectiveness. It is not so much a memoir of a life as it is the memento of an age, and the author seems, in his own phrase, to be the narrator at an illustrated lecture. The illustrations are provided by time, but his choice is brilliant and the narration is evocative.”—New Republic